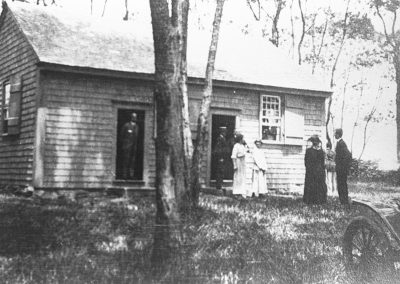 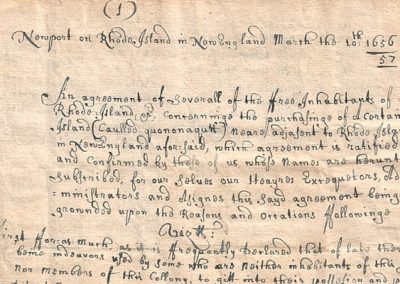 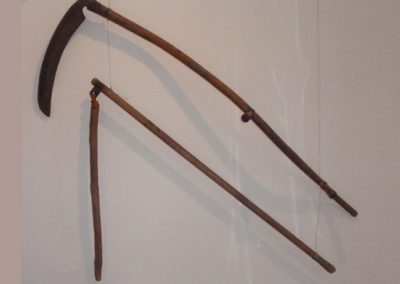 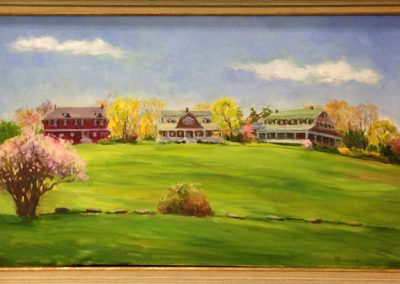 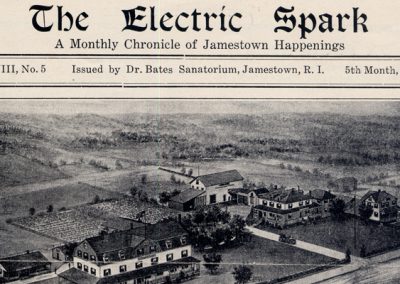 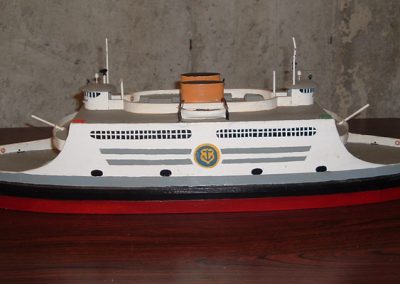 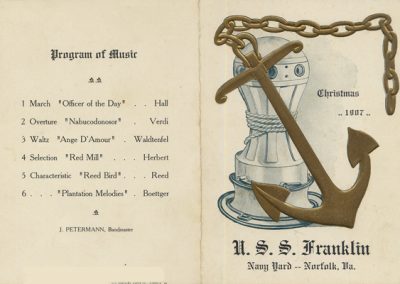 The JHS collections catalog is online. Search and view the catalog records of material in the collections.  The database is a work in progress. If you have any questions or believe you have additional information about any of the items you find here, we would like to hear from you at info@jamestownhistoricalsociety.org

Our Images can be used in accordance with our Image Use Policy, which can be examined here. 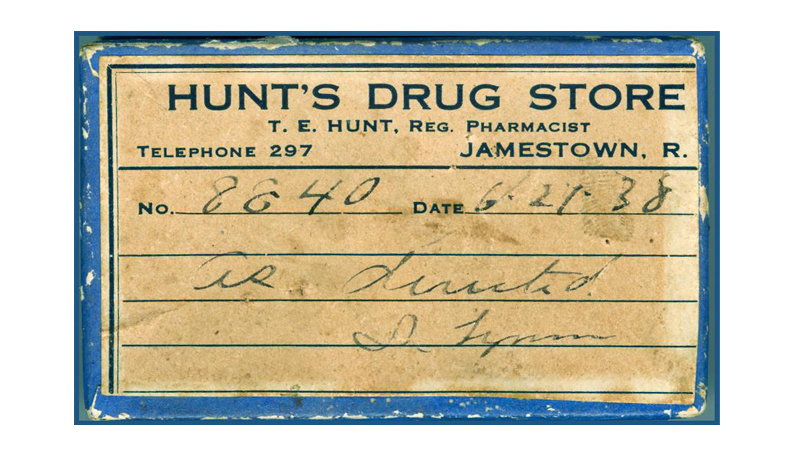 From the Collection – Pill Box From Hunt’s Drug Store

Hunt’s Drug Store stood at the corner of Conanicus and Narragansett avenues where the East Ferry Deli is now. It was owned by Thomas E. Hunt (1883-1965), Jamestown’s first year-round pharmacist. Hunt graduated from the Rhode Island College School of Pharmacy in 1904... 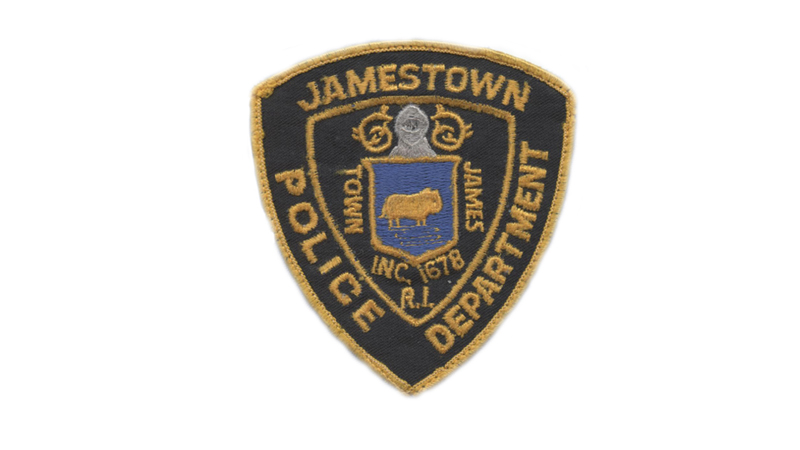 From the Collection – Sheep, A Jamestown Symbol

Sheep played a large part in the early days of the island of Conanicut. As early as 1637, when the Narragansett granted the right to the grasses of the island to the Newport settlers, sheep were grazed on the island. Sheep and wool remained important island products...

DAR ribbon with pins that belonged to Marguerite Eddy, who was the founder of the Jamestown John Eldred chapter of the DAR

Packet from the May 2020 Jamestown Financial Town Meeting

Material and photographs related to the Kennedy family, owners of Grey Ledge

Manuscript drawing describing a plot of farm belonging to Job Watson surveyed by Joseph Martin for a division March 2, 1832

Slides of building overpass over North Road and Clingstone photograph

Millennium 2000 Celebration button that lights up

Documents relating to the lawsuit against Commerce Oil Refinery

Newspaper clippings about the building of the Jamestown Verrazzano Bridge

Items relating to the quick claim sale of Greene Farm

Photos of the construction of the Jamestown Verrazano Bridge

Filmed interviews of members of the American Legion

Donations
Sign with the name Islander Restaurant on one side and the name Chopmist Charlie on the other side.

Jamestown Dog Tag 1. The metal tag in the shape of a dog house is inscribed “Dog Tax, 1974 Jamestown, Rhode Island 1”.

Material collected by Catharine Morris Wright when she edited the book, The Portuguese of Conanicut Island: History through Memories 1895-1980, published in 1980.

Acquisitions
The Collections Committee was able to purchase a 1784 document with affidavits related to the previously acquired 1783 Report of the Committee Appointed by the General Assembly Relative to the North End Farm on Conanicut. The case involved the dispute of ownership of the North End Farm after the evacuation of Rhode Island by the British troops.

Archives and photographs from Conanicut Grange No. 21.

Page from sketchbook with drawing of Jamestown shoreline from Owen Wister’s Crowfield home, 1915.

Rug woven by Helen Tefft on the loom in the JHS collection.

7 photos of moving Town Hall and 3 of filming of film, Dan in Real Life.

Papers of Judge and Mrs. C.B. Howry and their daughters Mary Howry and Elizabeth Howry

Notebook with review comments for the town charter committee in 1984 and notes from later review committee revisions.

Digital image of Fort Greble photo of soldiers including William Lee who died at Fort Greble and is buried at Town Cemetery at Four Corners.

Broom and dust pan for Museum

Photographs of the 1928 Chrysler Estate Wagon owned by BE Hutchinson.

Cup and saucer in the Unity pattern from Cottrell family set.

Photo of John Doty Sr. taken inside the Variety Store.

Family photographs to scan and return to donor.

Photographs of the PAC’s last day.

“A supplementary Essay on the Disestablishment of the Goat Island Torpedo Station,” by Varoujan Karentz, August 2016.

Four Save the Bay and one Rotary Bicycle Race medals.

Genealogies of the Remington, Arnold, and Parker families

Book, If Jane should want to be sold: Stories of enslavement, indenture, and freedom in Little Compton, Rhode Island by Marjory Gomez O’Toole.

Photos of Jamestown and of the Richardson and Caswell families.

Covenant of Faith, Respect and Mutual Concern, Agreed to by Three Jamestown Churches, 2016.

The Jonnycake Cookbook, published by the Society for the Propagation of the Jonnycake Tradition in Rhode Island, July 1993.

Jamestown air raid warden cards; eight cancellation postcards with drawing of the windmill; blueprint for the refloating of the Governor Carr with signature of John Smith; Ye Olde Map of James Towne or Quononoqutt Island, with ribbon and signatures of Jamestown Town Council in celebration of the Tercentenary; Postcards of Jamestown.

History of Jamestown Rhode Island by W.L. Watson; article series, “A History of the Town of Jamestown: Early days around Narragansett Bay” by Mrs. Helmick.

Plans for construction of stile at windmill; three pamphlets prepared by the Arnold-Zweir Post 22 of the American Legion.

Flyer for book, Historic Tales of Jamestown by Rosemary Enright and Sue Maden.

Photograph of the Maxfield farmhouse.

12 photos of the construction of the Veteran’s Memorial at East Ferry, 1997.

Collection of early photographs of Jamestown; aerial photograph of the two ferryboats on day of last ferry run.

Photographs and artifacts from the Wetherill-Stout-Slattery family; invitation to 50th wedding anniversary party for Mr. and Mrs. Webster King Wetherill, 1954.

Jamestown and Its Historical Society, presentation given to the RI Genealogical Society, March 19, 2016 at the Jamestown Philomenian Library.

Photographs of the pictures painted on the walls of the PAC.

Copy of History of Jamestown and early days around Narragansett Bay by Mrs. Elizabeth A. Helmick Newport Daily News, 1931 reprint.

Annual report of the adjutant general of the state of Rhode Island and Providence Plantations for the year 1865, published: 1893 and 1895.

Collected by staff: Newport Life Magazine, May/June 2015, p. 15, “Before the Bridge;” Barns and Pounds of Rhode Island: a vanishing landscape by Anne D. Holst. With photograph of Jamestown Pound on p. 30.

Anonymous: letter signed by members of the Conanicut Yacht Club requesting board not make changes to the club.

John Murphy: signboard from the ferryboat Beavertail; sets of plans by Tom Todd for the Community Center 2001 and by Andrew Yates for Fort Getty pavilion and landscaping 2011; papers from service as trustee of Jamestown Philomenian Library; Rhode Island History journals; newspaper clippings, 1990-1992.

Serena Beretta: 5 photographs of last ferryboat being towed out to sea.

Jane Carey: scan of photograph of her grandfather taken 1906 in Carr’s Grove.

John Godena: pamphlet, “What Ship is That? A numerical guide to the U.S. Navy;” seven photographs
Mike Gray: article “Picturesque Island of Jamestown and Oldest Transportation Route in America” from Book of Rhode Island.

Lorraine (Hull) O’Connors: printing press that her father, Leon Hull, used to print two early Jamestown periodicals, the Gazette and the Islander, during the late 1930s.

Fran Lopes: Copy of Articles of Association for The Holy Ghost Society of Jamestown, Feb. 21, 1927.

Sue Maden: photographs of the dedication of the new Jamestown Bridge; three books.

Walter Schroder: Packets of photographs of Jamestown in the late 1990s and early 2000s.

Tillinghast Association: book, Gleanings from the Wayside by A.W. Tillinghast who designed the Beavertail Golf and Country Club golf course.

Town of Jamestown: DVD of Ft. Getty presentation to the Town Council, 2013.

Dennis Webster: letter about mass to mark 2014 anniversary of the death of Private Francis X. Zweir.