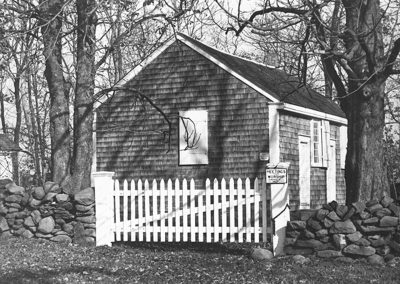 The Conanicut Friends Meeting was established by the Newport Quaker Monthly Meeting in 1684. The original meetinghouse was considerably north of the present meetinghouse, which lies 100 yards south of the windmill on Windmill Hill. The current meetinghouse is a simple rectangular building, built at the same time as the windmill in 1787 and shingled in a manner similar to the larger structure.

At the begining of the 19th century, the Quaker community in Jamestown became too small to sustain the meeting and the building fell into disuse. When the Meetinghouse was reopened in the early 1900’s for summering Philadelphia Quakers, it was afforded an “indulged” status to offer worship and Quaker services without the responsibilities of committee work (Finance, Ministry and Council, etc) that is expected in year-round Religious Society of Friends’ Meetings.

The size of our Meeting has waxed and waned over the years, but the Jamestown Quaker community hopes to keep the Meetinghouse and the spirit of Quakerism in silent worship in that simple place as a part of the life of the island, as well as in its history.

Preservation as an Historic Building

The Religious Society of Friends (Quakers) holds Sunday worship services weekly in the summer months Sunday, May 1 through Sunday, October 23, 2022 at 9:30 AM.

The public is always welcomed to attend and the building can be opened with advance request to the  Jamestown Historical Society.

Feel free to walk the grounds unless a meeting for worship is in session.

New Meetinghouse for the Conanicut Friends
The Monthly Meeting in Newport agrees that a new Quaker meetinghouse is needed since the old one has been destroyed during the British occupation. The Conanicut Friends promise to raise the money for material and to do the labor themselves. The building is built the following year.

Meetinghouse Placed on the National Register of Historic Places

JHS Takes Responsibility for the Historic Building
Title to the meetinghouse is transferred to the Jamestown Historical Society. The society agrees that the meetinghouse will be open to the Conanicut Meeting for worship.