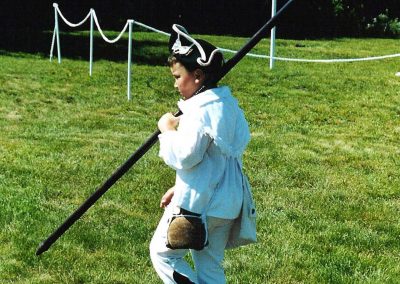 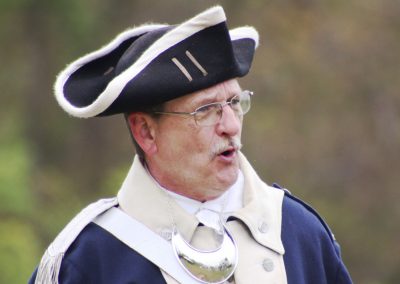 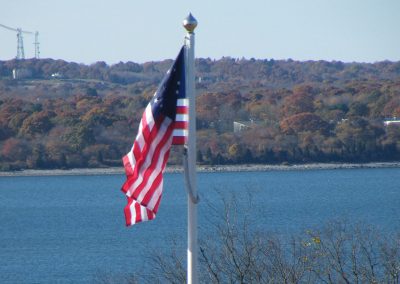 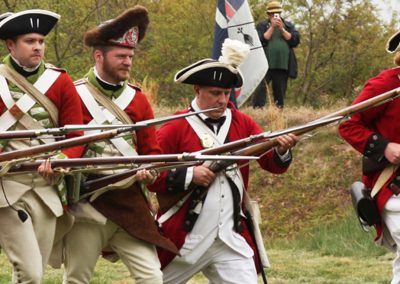 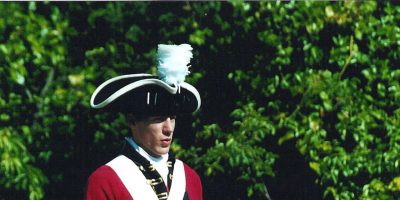 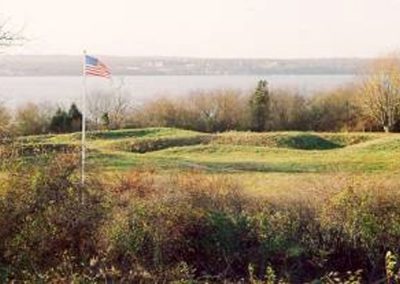 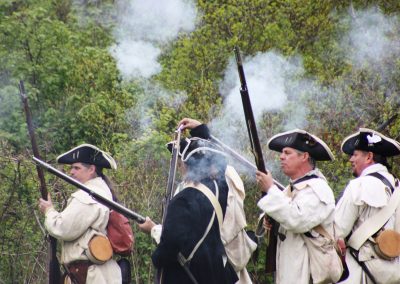 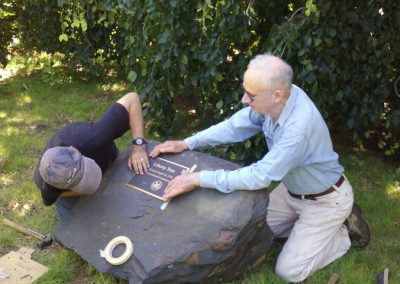 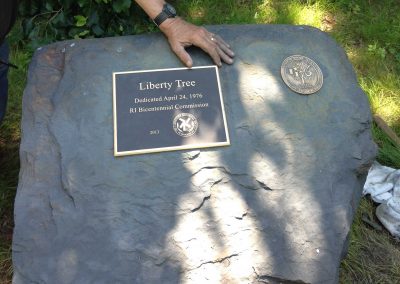 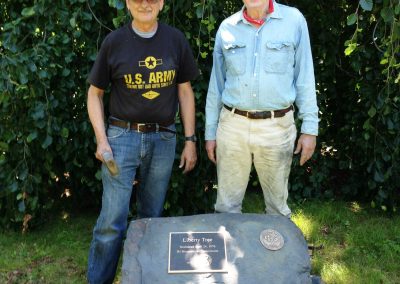 Battery Day is held at the Conanicut Battery Historic Park on Battery Lane, Jamestown, RI. The event celebrates the small fort constructed by the colony of Rhode Island and Providence Plantations on the west side of Conanicut Island in 1776 to protect against a British invasion up the West Passage.

On Battery Day, the sound of cannons reverberate across the West Passage. Re-enactors recreate a Revolutionary War skirmish. Patriotic music is played. The flags of the three nations that occupied the fort – United States, England, and France – are raised above the earthwork battlements.

Our next Battery Day is planned for the spring of 2022.

The Rhode Island General Assembly ordered the building of the Conanicut Battery in 1776. The original fort was probably a simple, crescent-shaped earthwork designed to house and protect six to eight heavy cannon and their men. The British captured the fort in December 1776 and occupied it until October 1779. They rebuilt the battery in the shape seen today. A ditch surrounds the earthen barricades on all sides. The fort could house heavy cannon to defend the West Passage, and the bastions on the north and south protected it from land attack.

French forces coming to the aid of new United States manned the Conanicut Battery in 1780 and 1781.

During the 19th century, the land was farmed.

In 1916, the military re-acquired the land and built six underground observation posts on the top of Prospect Hill, just east of the 1776 battery. From there, military observers had an unobstructed view of the approaches to Narragansett Bay and of the mine fields laid in the East and West Passages during World War I and World War II.

In 1963 the federal government gave the property to the Town of Jamestown, and in 1972 Conanicut Battery was added to the National Register of Historic Place.

Since the restoration of the park in 2002, the Jamestown Historical Society has worked with the town to maintain the historic elements within the Conanicut Battery Historic Park. Ever other year, the society sponsors Battery Day to celebrate the history of the park.

The park is open from sunup to sundown every day. 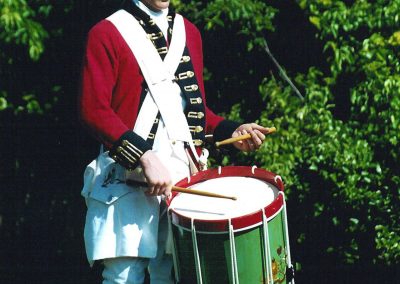 General Assembly Orders that a Fort Be Built
The General Assembly votes to “erect at fort at Beaver Tail, upon Conanicut, to contain six or eight heavy cannon.” By December, when the British fleet of 70 ships sails up West Passage, the cannon have been withdrawn to Aquidneck Island. After securing Newport, the British quickly occupy the Conanicut Battery.

Battery Returns to Farmland
The British evacuate Jamestown in 1779. America’s French allies briefly man the fort before it is abandoned. Sheep and cows graze around the earthworks for the next 135 years.

Observation Bunkers Built Above the Battery
As World War I begins, six observation posts are built on Prospect Hill, east of the colonial battery. Observers in the underground posts use sighting instruments to take bearings on targets and telephone the data to the gun batteries around the bay.

Conanicut Battery Becomes a Jamestown Park
The United States Army deeds the land to the town of Jamestown, noting that reconfiguration of the land as a historic park would preserve a fragile remnant of the Revolution. Nine years later, the park is added to the National Register of Historic Places.

Friends of Conanicut Battery Clear the Earthworks
The Battery has become overgrown. Ed Connelly leads the restoration of the earthworks and the installation of didactic signage. The Jamestown Historical Society forms a Battery Committee and in 2008 takes over the maintenance of the historic elements in the town park.
We use cookies on our website to give you the most relevant experience by remembering your preferences and repeat visits. By clicking “Accept”, you consent to the use of ALL the cookies.
Cookie settingsACCEPTRead More
Manage consent