Extraordinary Jamestown Women
and Their Stories

In March 2019, Roger Williams University Archivist Heidi Benedict created a special exhibition that recognized and celebrated sixty women who have made a difference in their East Bay communities. Spanning more than three centuries of Rhode Island’s history, the Extraordinary Women of the East Bay Exhibition recognized women from Barrington, Bristol, Jamestown, Little Compton, Middletown, Newport, Portsmouth, Tiverton, and Warren.  Sixteen local historical societies, museums, and libraries contributed to the exhibit and six Jamestown women from the 19th and 20th century are included. They are featured here with short histories of their lives and accomplishments. 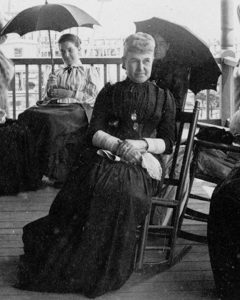 Mary Richardson Rosengarten In 1904, the century old Jamestown windmill, unused since 1897, was quickly deteriorating. Mary Rosengarten, a summer visitor from Philadelphia, led the effort to save it. From her cottage, “Honeysuckle,” on Lincoln Street, she collected over $700 to buy the mill and approached the Rhode Island General Assembly to ensure a clear title to the property. She oversaw maintenance of the windmill until the Jamestown Historical Society was founded in 1912. Mary was involved in many other efforts to increase the popularity of Jamestown as a summer resort while maintaining its rural charm, sponsoring various events to raise funds to improve the town’s amenities. 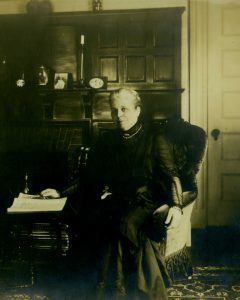 Elizabeth H. Clark was only age 18 when she became a sorter and classifier of marine specimens at The Museum of Comparative Zoology in Cambridge. Seven years later, about 1880, she became personal assistant to Alexander Agassiz, son of the founder of the museum, Louis Agassiz.

Shortly after the death of his father in 1873, Alexander acquired a small peninsula in Newport, where he built a substantial house – now the Inn at Castle Hill – and a laboratory for use as his summer residence. Clark traveled back and forth between Agassiz’s two labs. Since Agassiz spent much of his time away on exploratory expeditions, Clark was responsible for his zoological interests both at his Cambridge and Newport laboratories during his frequent absences.

Clark lived with her mother and never married, but in the early 1890s, her sister-in-law died and her brother brought his children to them to care for. According to family reports, Agassiz said to her “Miss Clark, I have some extra furniture. Why don’t you build a house for your mother and the girls over on the island?” Clark hired Charles L. Bevins, a noted Jamestown architect, and built a home for herself and her four nieces and nephews on Walcott Avenue. When Agassiz died in 1910, he left her $25,000 – more than $600,000 in 2018 dollars – plus $5,000 a year for life. 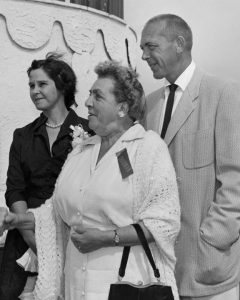 Marguerite Elliott Eddy  graduated from Vassar in 1914. After doing graduate work in bacteriology at the College of Physicians and Surgeons at Columbia University, New York University Medical School, Brown University, and the Marine Biological Laboratory at Woods Hole, Massachusetts, she worked as a bacteriologist at Wasserman State Laboratory and, from 1921 to 1956, at the Newport Health Department. Soon after moving to Newport, she met William Eddy, the divorced father of singer Nelson Eddy, at St. George’s Episcopal Church in Newport where they both sang in the choir. They were married in June 1923 and settled in Jamestown.

Eddy soon became involved in Jamestown’s political and social life. She organized and served as regent of the John Eldred Chapter of the Daughters of the American Revolution and held many state DAR offices. As Jamestown Health Officer from 1931 to 1937, she was responsible for assessing and documenting health risks to the town’s population. She was secretary on the 1952 Jamestown Charter Commission, which recommended that the charter be changed to allow a professional Town Manager to be hired. She was elected to the Jamestown School Committee, and in 1958, she made an unsuccessful bid for a seat on the Jamestown Town Council, the first woman to run for Town Council. The same year, she served as parade adjutant in Jamestown’s tercentenary parade. 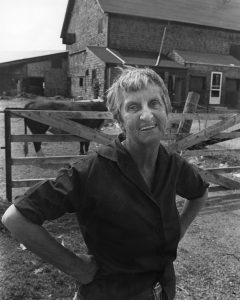 Catharine Morris Wright was an artist, author, philanthropist, farmer, and guardian of nature. The only child of Harrison S. Morris, an early director of the Pennsylvania Academy of the Fine Arts and later president of the Art Association of Newport (now the Newport Art Museum), she was introduced to art and artists early in her life. In her teens, she attended the Philadelphia School of Design for Women, and she continued to paint most of her life. Her oil portrait of her father hangs in the Newport Art Museum.

Catherine first came to Jamestown before her first birthday and returned often, initially as a summer visitor at Horsehead, and later, after purchasing Fox Hill Farm in the late 1940s, as a resident. Her paintings often depicted scenes of Conanicut Island. To help protect the island she loved, she established restrictions on development of her land with the Nature Conservancy and gave part of Fox Hill Farm to the Audubon Society for a nature preserve. In the early 1930s, men working near Jamestown’s West Ferry unearthed some human bones and artifacts. To prevent looting of the graves, the town bought the land and asked Wright to take charge of the material recovered. She donated the Sydney L. Wright room in the Jamestown Philomenian Library to display the artifacts.

Her poetry and essays appeared in magazines, including the Atlantic Monthly and the Saturday Evening Post. Her published books include two books of poetry, an autobiography, a collection of family reminiscences, and a biography of Mary Mapes Dodge. In the late 1970s, she worked closely with Shirley Tiexiera Quattromani to publish interviews with Jamestown residents of Portuguese heritage in History of the Portuguese of Conanicut Island, 1895-1980. 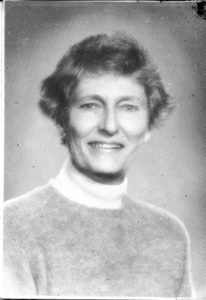 Mary Stearns McGaughan and her husband, Terrence, lived on the Stearns’ family farm abutting the North End lighthouse at the northern tip of Jamestown. In April 1956, Commerce Oil Refining Corporation, backed by Gulf Oil, presented plans for an 800-acre facility north of Carr Lane. The McGaughans joined with other concerned citizens to form the Jamestown Protective Association, to oppose the plan. Although the opponents were a minority, they managed to delay the building of the refinery for four years, and in the end, Gulf Oil withdrew its support for the project. In 1994, Mary McGaughan wrote the story of the opposition in Dismissed with Prejudice: the Epic Battle Against Construction of an Oil Refinery in Jamestown, Rhode Island.

Following up on her environmental interests, McGaughan founded the “Kindness Club” to encourage children to take good care of animals and, in 1972, she developed an educational program about animals for third-graders. Her “Kindness Club” evolved into the Humane Society of Jamestown.

The Jamestown Philomenian Library, founded in 1874, was for over 70 years housed in a tiny building that had once been a primary school. In the mid-1960s while president of the Jamestown Women’s Club, McGaughan began to advocate for a new, modern library building. In 1968, along with ten others, she organized the Friends of the Jamestown Philomenian Library. The Friends successfully led the drive to build a new library on North Road which opened in 1971. 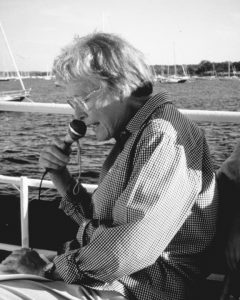 Mary Robinson Miner and her husband William summered on Conanicut Island for over 10 years before they moved to Jamestown full-time in the early 1950s. In 1956, shortly after their move, Commerce Oil Refining Corporation presented plans for an 800-acre facility slightly south and west of their East Passage home. The Miners, who had lived in New Jersey, were very familiar with the pollution that oil refineries cause and took leadership roles in opposing the development. Together with other opponents, the Miners formed the Jamestown Protective Association and successfully fought the development.

Miner devoted herself to preserving Jamestown’s history. For 50 years, she was an active member of the Jamestown Historical Society. From 1972 to 1990, she was exhibit curator and a member – most often the chair – of the museum committee. In this role, she was instrumental in turning the 1885 primary school that had been vacated by the library in 1971 into a museum and a safe storage area for the society’s artifacts.

As Jamestown Historical Society’s archivist from 1990 until shortly before her death in 2005, she initiated new standards of care for the collection, especially of photographs and other archival material. To honor her years of exceptional service, the Jamestown Historical Society established in her name a permanent endowment fund, the income of which is used exclusively for the direct care and management of the society’s manuscripts, books, documents, photographs, prints, and paper ephemera.