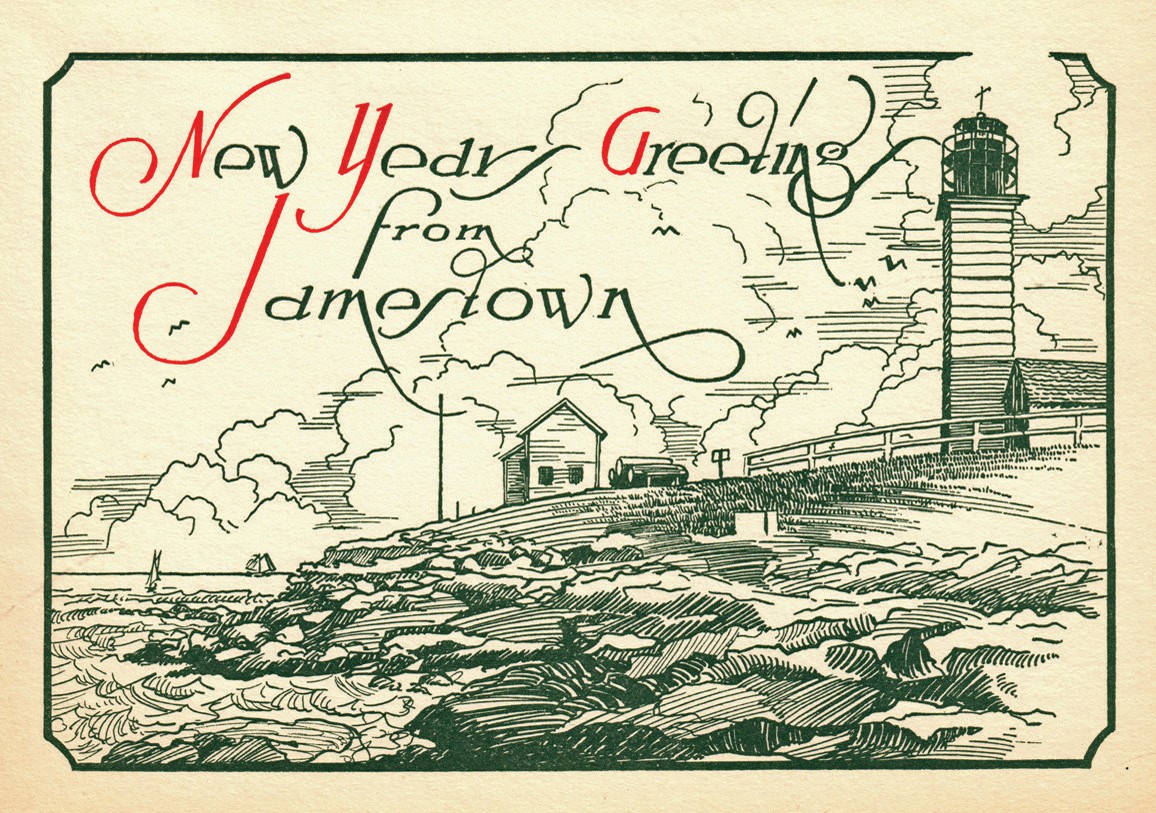 The New Year’s greeting to summer residents from 1930 suggesting they entice their friends to come to the island.

In May 1929, 21 Jamestowners met at Town Hall to form an organization to “promote the economic, civic, and social welfare of the people of Jamestown and vicinity.”

The founding members were all Jamestown businessmen, most from East Ferry and Narragansett Avenue. Although the group did not exclude summer residents, its primary interest was to improve the business climate in Jamestown, which meant providing better services for the visitors.

In the first year of the Jamestown Board of Trade, several business interests sought their support. George Wilbur came forward to explain the details of the Conanicut Club, an elaborate country club to be established at the north end.

Aubrey Clarke, who had built an 18-hole golf course on Beavertail in 1926, wanted the support of a five-year tax exemption for a new hotel he planned south of the golf course. Linked to his request was a proposal to move the West

Ferry terminal of the Jamestown &

Newport Ferry to Orchard Road, an extension of Weeden Lane. Although the route would shorten the water passage from Saunderstown, it would, as many pointed out, make it harder to access the town.

The Great Depression of the early 1930s destroyed the idea of any immediate expansion of the resort economy. The Conanicut Club died a quiet death. Clarke’s Beaver Tail Country Club struggled into the 1940s, but without a new hotel. The move of the West Ferry terminal was voted down by residents, 376-252.

In the meantime, the board of trade turned to the urgent task of finding work for unemployed residents dislocated by the economic downturn. In January 1931, as the Depression deepened, the board sent letters to 100 summer residents asking for them to contract for repairs to their summer homes at once. This would both relieve the unemployment and lessen the congestion in the spring. The reply was heartening. During the next few years, with state and federal aid, supplemented by money raised by the board, the town weathered the economic storm.

Other concerns also involved the group. One continuing campaign was for a bank. With no banks on the island, summer residents had no immediate access to their money. Local businesses had to keep more cash on hand than was practical or safe. Bankers from Newport were reluctant to establish a Jamestown branch because they feared it would not generate sufficient income, and would be practically non-existent during the winter months. A bank was not available in Jamestown until 1958 when Industrial National Bank opened a branch at the corner of Narragansett Avenue and Green Lane.

Working with their local congressman, members of the board successfully arranged for full-time letter carriers beginning in August 1931. This was contingent on the installation of mail receptacles and the proper numbering of buildings. With the Westerly Chamber of Commerce, they also decried the building of a new road paralleling the current-day Interstate 95 since it would move traffic inland away from the shore resorts and the ferry to Jamestown.

When a bridge across the Providence River was proposed in 1932, the board joined with the Newport Chamber of Commerce in opposing the construction bonds because the bridge would offer a shorter route to Cape Cod, reducing tourism to their communities. They lobbied strongly for a bridge to Jamestown from Saunderstown, even after the state commission on emergency public works opposed it.

Jamestown’s first zoning code was enacted in 1935, and the board followed the development and, at times, lobbied for provisions.

Through it all, the members continued to work on advertising the island. At times, the advertising was subtle, as in 1933 when they sent New Year’s cards to all summer residents saying “we consider our visitors our guests and sincerely trust you will speak to your friends of the beauties of our island.” At others, it was more direct and included distribution of the ferry timetable. At its annual meeting in 1939, the members of the board of trade voted to change the name of the organization to the Jamestown Chamber of Commerce.

This article is part of a series for The Jamestown Press. It appeared in December 2022.