In the aftermath of World War II, the world faced the twin tasks of recovering from the dislocations that had affected everyone’s life and of defining the future direction of society.  Many new governmental organizations were founded – from the United Nations (October 1945) at the international level to the Jamestown Planning Commission (authorized January 1945, instituted April 1947) at the local level.

Non-governmental organizations were also formed to address the problems ahead, among them the Jamestown Forum, which first entered the public eye in 1947.  The aim of the new organization was “to promote the civic betterment, the public improvement, and the general welfare of the Town of Jamestown.”  The group specifically denied being a political action committee, although throughout its eight-year history it took stands on most problems that confronted the town.  In 1952, the Forum’s success in gathering facts and making them available to the public inspired a similar group to be formed in Middletown.

The Forum turned its attention to the related problem of travel between the Jamestown Bridge and the ferry wharf at the end of Narragansett Avenue.  With the end of World War II gas rationing, traffic on the Jamestown Bridge increased.  Cars, trucks, and buses were routed across the two-lane Eldred Avenue and down East Shore Road.  The Forum floated a plan to reroute the traffic down North Road and across Narragansett Avenue.  The suggestion went nowhere. 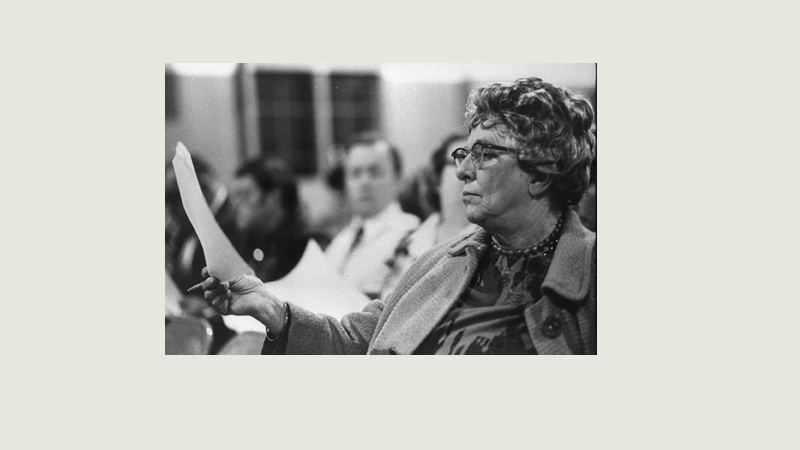 Mary Tapper Tollefson, a member and secretary of the Forum, continued to monitor Jamestown government after the demise of the organization.

The group had more success with its support of Jamestown Bridge Commission transparency.  For its first 15 years, the commission issued no reports or minutes. Criticisms of the commission’s activities were aired at several Forum meetings in the late 1940s and early 1950s.  In 1951, Forum member Commodore Cary W. Magruder (USN, ret’d) was elected to the commission with the avowed intent of making the commission more responsive to public needs. As commission chairman in 1953, he published the first administrative report, covering the years 1937 to 1952.

The Forum also urged that the governance of the ferry system and bridge be combined and turned over to the state.  The state took over the bankrupt ferry system in 1951, but the bridge remained in the control of the commission until 1969 when the Newport Pell Bridge was opened.

Throughout the early 1950s, the organization held a series of well-attended public meetings on the competing financial demands of a new school and a sewage disposal facility.  School Committee Chairman Fred C. Clarke and Superintendent Anthony J. Miller explained the school requirements to over 250 attendees at separate Forum meetings.  A bond issue to build the Lawn Avenue School passed at the May 1953 Financial Town Meeting.

Advocacy for a sewage disposal plant was less successful, despite a state anti-pollution law passed in 1947.  About 150 people listened to the heated discussion about how to fund such a plant, but no firm plan of action was proposed, and no wastewater treatment plant was built for over 25 years.

The Forum died a quiet death.  The last newspaper account to mention the Forum appeared on June 22, 1955, and reported “meetings will be held at the call of the president or five members when matters vital to welfare of the community are to be discussed.”

Most of the issues that the Forum attempted to enlighten the public about are no longer of concern. A charter that allows the hiring of a Town Administrator and of professionals for many of the jobs that in the past were elective passed in 1974; much of 1954 was spent discussing the pros and cons of this form of government.  Fort Getty was acquired for recreation despite some objections that the town didn’t need a park that large.  A permanent, trained police force replaced local constables in 1958.

Some issues still resonate.  Recreational facilities were and are a concern.  Traffic and parking and how to handle them warrant discussion.  Introducing candidates to the electorate without reference to party affiliation is a biennial need.

This article is part of a series written by Rosemary Enright and
Sue Maden for The Jamestown Press. It appeared in June 2022.