Many Jamestown residents have given the ultimate sacrifice to their nation during wartime. While honoring the local men and women who have died, the community also is compelled to take stock of the causes for which they fought, as these causes still have echoes in the world today.

In World War II, more than 422 Jamestown men and women served in the military, some losing their lives to defeat fascism. That includes Francis Zweir, who, after surviving the deadly landing at Utah Beach on France’s Normandy coast, was killed in action in 1945 by Nazi troops in the Battle of the Bulge while crossing the Wiltz River.

Many Jamestown enlistees became fully aware of the ideology of their foe as news began to leak out of Germany, Ukraine and other killing fields. In 1943, they may have read in the Newport Daily News that the Red Army had “broken the 17-month siege of Stalingrad,” and were bearing down on “the steel city of Kharkov, the Pittsburgh of the Ukraine,” to free it from fascism.

Later that year, long before Jamestown recruits landed at Normandy, the Soviet Army freed Ukraine from the Nazis, and uncovered two of the largest massacres of Jews in the war: 50,000 in Odessa, and 30,000 at Babi Yar. They invited The New York Times to report on these atrocities and people in Jamestown undoubtedly read these stories in horror. Tens of thousands of Russians and other civilians were buried at Babi Yar, murdered by Nazis and Nazi sympathizers. Contrary to today’s sometimes simplistic understanding of Nazism, large segments of the population in eastern Europe cheered the Nazis as liberators as they marched in, while others hid or fled. 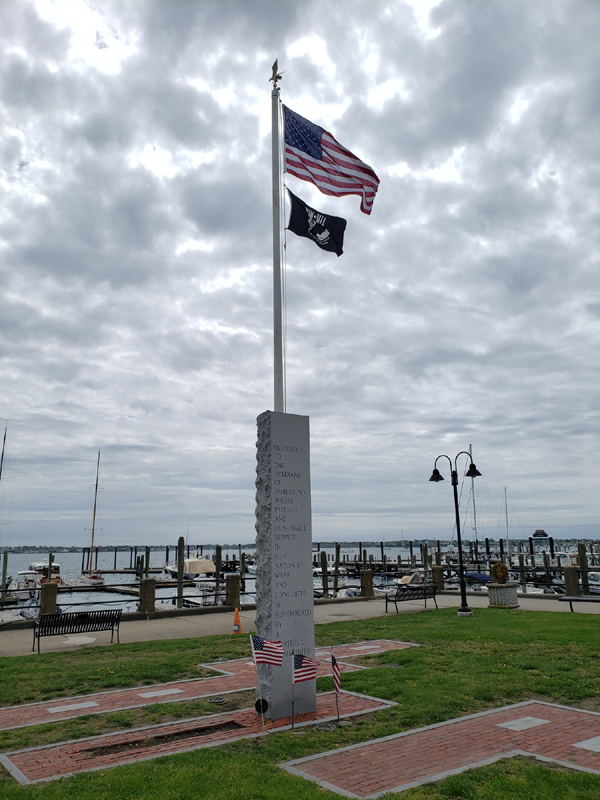 Above: This monument at Veterans Memorial Square along the East Ferry waterfront is dedicated to the “veterans of Jamestown whose patriotic and honorable service in our nation’s wars and conflicts is remembered by a grateful community.” Photo courtesy of Peter Fay.

Only weeks before Zweir was killed near the German border, Himmler attempted to hide his crimes, ordering the destruction of the Auschwitz-Birkenau gas chambers where 1.1 million Jews, and 160,000 other so-called “untermensch” (subhumans), were murdered: Poles, Russians, Ukrainians, Romas (Gypsies), communists and homosexuals.

All Jews and Slavs were equally unworthy of life in the Nazi ideology, which permeated not only Germany, but also elsewhere in eastern Europe.

Many other Jamestown residents died in combat against the Axis powers, even after the Soviets had turned the tide of the war, dealing Germany massive defeats in Stalingrad, Leningrad and Ukraine. The war ultimately cost the Soviets 27 million dead, which is more than half of all deaths from the war.

By 1944, Jamestown’s landscape was dotted with men who shipped off to fight, but never would return. Howard Arnold, of Cole Street, was felled by machine gun fire in October 1944 and is buried in Saint-Avold, France. Columbia Avenue’s Lewis Burdick, 19, was killed in Germany, and 23-year-old Arthur Day, of Friendship Street, died at Okinawa.

William Sweet, of Clinton Avenue, perished in his B-24 bomber in the Adriatic, and his neighbor on that street, David Masterson, also died in the war. Ocean Avenue’s Everett Alward and the Brooks cousins, of Conanicus Avenue, were among the 407,000 Americans who died and left a deep emptiness from their loss.

These sacrifices were not in vain. Nazi Germany and Japan were defeated after five years of war. Leaders were tried, and their militaries defanged and disarmed forever to prevent another war. Victory celebrations were conducted across the country and in Jamestown.

While Jamestown and America slowly tried to return to a normal life, much of eastern Europe continued to struggle. Those who had fought both for and against the Nazi regime continued to fight clandestinely against the Soviet government, supported at first by Britain’s MI6 and later the CIA, with thousands dying even through the 1950s.

The Union of Soviet Socialist Republics fell in 1991. The republics became independent nations. The new nations removed monuments to the Red Army liberators, replacing them with their own national heroes. Ironically, though, many of these were also Nazi collaborators. Adherents of this new nationalism with old roots still hold much sway today across the East of Europe.

The sacrifices of Jamestown in World War II were profound and changed the outcome of the world. They contributed to a world free of fascism and anti- Jewish atrocities, hopefully for decades to come.

The later generations who benefit from their sacrifices must decide if, and how, to carry forward the cause to which they gave their lives.

This article is part of series written by Peter Fay for The Jamestown Press. It appeared in May 2022.