From the Collection – Flower Shows

In 1827 the Philadelphia Horticultural Society hosted the first American flower show with the aim “to inspire taste for one of the most rational and pleasing amusements of man”. Flower shows have played important roles for most gardeners and Jamestown proved no different.

The Jamestown Garden Club created around 1904 was a loosely organized group of members who enjoyed visiting other member gardens followed by a tea and socializing. In September 1918, Anna W. Morris records in her diary that she hosted a club meeting on her yacht Ariel which was anchored  and visitors were brought over to the yacht on her launch. She recounts “Mrs. Wharton poured tea, from our plated silver pots marked Ariel, steward made sandwiches of chicken and marmalade. There were 18 in the dining cabin at one time and it looked too cute for anything”.  It wasn’t until 1923 that she herself was made a member of the club, presumably war years intervened. 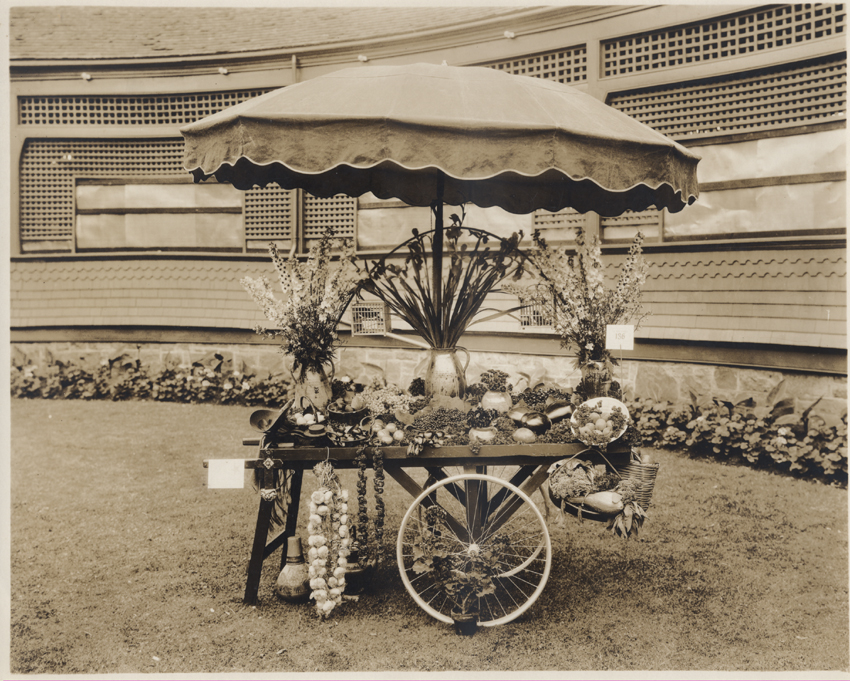 The first official Jamestown Flower Show was in August 1928 at St. Mathew’s Parish House and was held there annually for many years. There were eleven classes that participants could enter including aquatics and artistic arrangements of garden and wild flowers.  In 1932, The Rhode Island Garden Club hosted a show at the Newport Casino and the Jamestown club won first prize with its entry the Spanish Push Cart. This extravagant entry consisted of pale yellow iris, gladioli and two shades of delphinium presented in large silver vases.  Many fruits and vegetables were displayed including purple figs, green gages and cherries with strings of red peppers and garlic cascading over the edge.

Today Jamestown has two garden clubs with the establishment of the Quononoquott Garden Club by Mrs. Hiram Eliason at her home on Highland Dr. in Sept 1949.