Jamestown has had many inventive and colorful residents over the years, among them John Robert Caswell.  Caswell, who was known as JR, was born in Somerset, MA, in 1875.  He was only 22 and his bride, Isabella Collins, was 18 when they married.  Soon after, the young couple moved to Jamestown, and over the next 10 years, Isabella gave birth to six children, five of whom survived their first year.

In Jamestown, JR set himself up as blacksmith.  It was the beginning of the 20th century, and times were changing.  JR changed with them, morphing from blacksmith to machinist as cars replaced horses.  He combined the two skills to build a bus to carry passengers between the East and West Passage ferries.  He also constructed an acetylene gas generator in his shop on West Street to light the family’s house around the corner on Columbia Avenue.

Radio fascinated him.  The first commercial radio station KDKA out of Pittsburgh began broadcasting in 1920.  According to family lore, JR built a radio receiver and rented Town Hall for a radio listening concert to give all Jamestown residents a taste of the new technology. 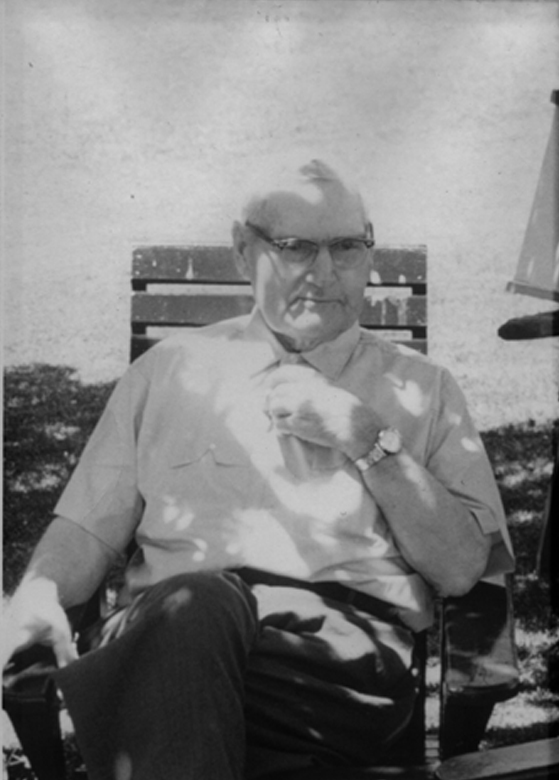 John R. Caswell about 1950. Courtesy of Donald Richardson
Isabella, too, contributed to the family income.  Her grandson remembers her selling penny candy from the West Street building to the children on their way to the Carr School, which stood where McQuade’s stands now.

Things fell apart in 1922 when JR ran away with Kathryn Louise White, a Jamestown girl over 30 years his junior.  The couple travelled across Canada to the West Coast and then down to San Diego, where he worked as a machinist at Ryan Aircraft.  Lindburgh’s Spirit of Saint Louise was built at Ryan Aircraft, and JR told his grandchildren he worked on the plane.

In the meantime, back in Jamestown, Isabella was granted a divorce, and in 1927 she married Walter Bollons, a widower and an employee of the Jamestown & Newport Ferry Company.

JR and Kathryn were married in Louisiana in 1925.  In the early 1930s, they settled in Nashville.

In Tennessee, JR worked for Betty Lou Bakery, and he entertained his children and grandchildren with stories of what happened there.  The bakery made a birthday cake for Shirley Temple.  The cake was seven feet tall and one of JR’s tasks was to make aluminum supports and shelves to hold the cake steady while it was flown to California.  Unfortunately, no one had considered the size of the loading door and the cake had to be tilted to fit through.  The cake broke.  But it was patched up and flown to Hollywood anyway. 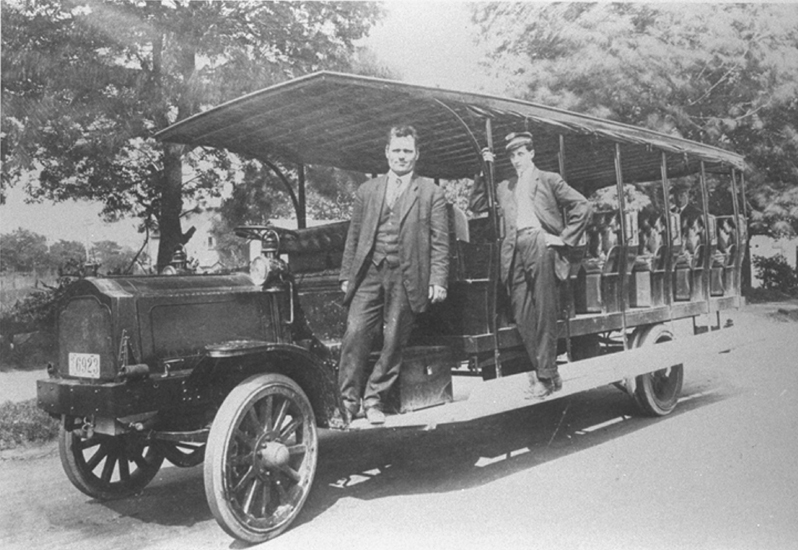 John R. Caswell and Bowen Von Schade on the bus that Caswell built to carry passengers between the east and west ferries.
JR’s children from his first marriage visited him in Tennessee, and after about five years, JR, Kathryn and their three children returned to the island.  The family continued to grow with three more children being born in Rhode Island.

Back home in Jamestown, JR continued his inventive ways.

At some point in his peripatetic career, he had worked in an electric motor factory and could rebuild electric motors and generators.  One time he used varnished shoelaces to provide the necessary insulation.

The original water tower on Howland Avenue could overflow if too much water were pumped from the pumping station on Southwest Avenue.  JR was working for the water company and constructed a float-operated semaphore that alerted the operator at the pumping station to shut the pump off.

In the 1930s, home heating oil was carried from the tanker truck to a home in 5-gallon cans and the cans were emptied through a large funnel into the oil tank.  To speed up the process and make it less labor-intensive, JR used a discarded filling station gasoline pump with several gasoline pump hoses coupled together.  He powered the pump with an automobile electric starter and the fuel truck’s generator.  The result was similar to the oil delivery trucks we see today.

When the Jamestown windmill was restored in 1953, he was part of the crew reconstructing the old building.

John Robert Caswell died in June 1964 at 89 years of age.  Many of his 11 children and their descendants stayed in Jamestown and have provided much of the information for this article, for which we are most grateful.

This article is part of a series written by Rosemary Enright and
Sue Maden for The Jamestown Press. It appeared in April 2022.