Soon after Confederate troops fired on Fort Sumter, SC, in April 1861, Rhode Island was called on to supply troops to suppress the rebellion.  Training the raw recruits was of prime importance, and Jamestown was the site of two training camps: Camp Bailey on Dutch Island, the home of the 14th Rhode Island Heavy Artillery (Colored), Rhode Island’s Black regiment, and Camp Meade.

Camp Meade (sometimes spelled Mead) was the training camp for the Third Rhode Island Cavalry.  It was established between June 26 and August 18, 1863, and probably named for General George Gordon Meade who had just taken command of the Army of the Potomac. 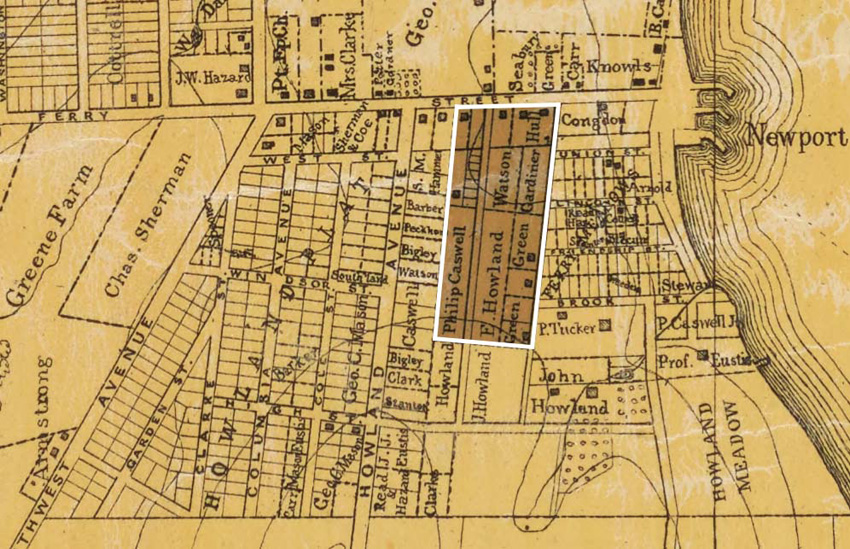 The 16-acre government compound was inside the village of Jamestown, although its exact boundaries are unclear.  On the north was Narragansett Avenue; on the east, a driftway, or path, across the Howland farm that is now Green Lane.  The southeast corner appears to have been at what is now the southeast corner of the lot at 56 Green Lane with the southern boundary running parallel to Narragansett Avenue and the western edge in the farmlands east of Howland Avenue.

Between August 28, 1863, when the first 150 trainees arrived, and early summer 1864, all recruits for Third Rhode Island Cavalry – about 1,000 total – trained at Camp Meade.  None of them came from Conanicut Island.

The total population of Conanicut Island in 1860 was only 400, and the men in Camp Meade far outnumbered the residents of the tiny village that surrounded it.  They lived in their own separate world and, as is often true when military encampments are built in close proximity to civilian enterprises, there was friction.  Town Council records from early October, when the trainees had been on-island for a little over a month, contain complaints that the horses stabled at the camp were “going at large on the public highways of Jamestown.”  The following month the Council heard complaints that the soldiers were “taking indiscriminately poultry and sheep and throwing down fences.”  The Town Council’s reaction to the complaints was to send a committee to the Governor asking him “either to have the camp fenced and guarded or removed to a more suitable place.”

A little over a month later, in late December 1863, the main body of the Third left Jamestown for the front. New recruits continued to be trained at the camp through the spring, but complaints – at least those that reached the Town Council – lessened.

The military built several buildings in the camp and after the Third Rhode Island Cavalry left at least three of the buildings were repurposed.

The Town, through the agency of John T. Cottrell, purchased the hospital building, which was on the Green Lane side of the camp, to serve as a Town Hall.  The clapboard building, which was 20 by 40 feet and about 14 feet high, cost $150.  The Town was given 30 days to move it to a new location, but it burned down.  Exactly when the fire happened is unknown.

Colonel A. Crawford Greene, who had served at Camp Meade, and his family bought two other government buildings in the vicinity of what is now 56 Green Lane.  (Family members believe the street was named for the family despite the lack of the final “e” in the street name.)  They then leased the land on which the buildings stood.  The lease allowed them to keep two horses and two carriages in John Howland’s barn for a period not to exceed three months during the warm season each year, to get water from an adjacent spring, to use the Green Lane driftway, and to use an existing private path through Howland land to the shore.

By turning the buildings into summer residences, the Greenes became the first summer cottagers of Jamestown’s resort era.

The Howland plat dividing the Howland farm into house lots and platting new streets, including Howland Avenue, was recorded in 1873.  Houses were built along Green Lane.  Clinton Avenue through the center of the old camp was accepted as a public thoroughfare in 1881.  Colonel Greene’s daughter Clara and her husband William Allison tore down the Greene’s remodeled military building and built the still-standing “Sea Haven” in its place about 1897.

Evidence of the short-lived military presence at Camp Meade disappeared.

This article is part of a series written by Rosemary Enright and
Sue Maden for The Jamestown Press. It appeared in January 2022.