The Jamestown Holiday Season over the Years

During the holiday season in the 21st century Christians of many faiths celebrate the birthday of Jesus with Christmas parties and presents.  Jews gather for Hanukkah, the festival of lights. Americans of African heritage express their unity at Kwanzaa.

The early European settlers of Jamestown, who all came from Christian backgrounds, didn’t think that Christmas needed any special observance.  The Puritans in Massachusetts passed a law in 1659 that forbade anyone from celebrating Christmas by failing to work, by feasting, or in any other way.  The Society of Friends, the dominant religion in Jamestown in the 18th century, taught that all days are the “gift of the most High;” Christmas was no different than any other day.  The Baptists, officially organized in Jamestown in 1841 but active long before that date, focused on religious services to memorialize the day. 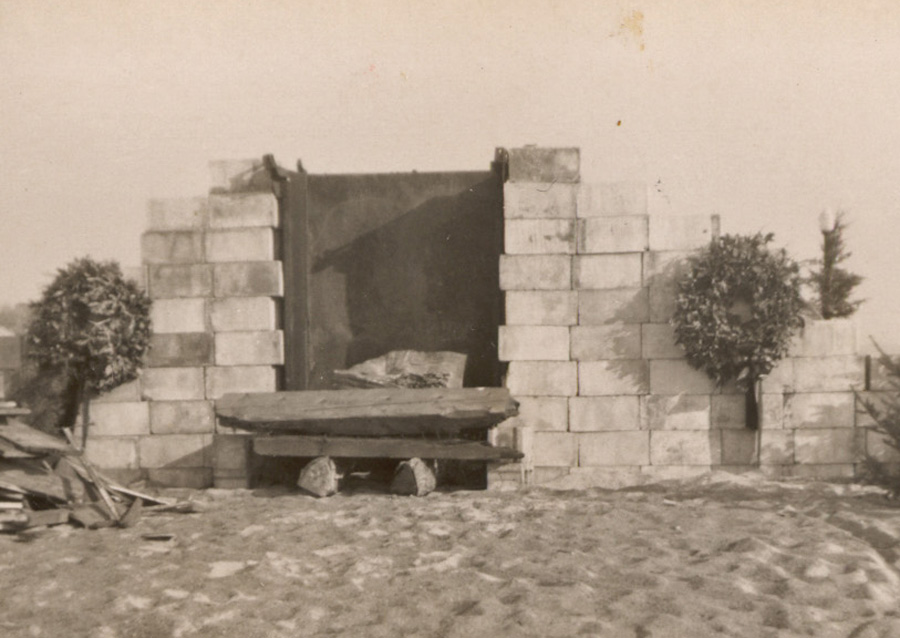 The yule log fireplace built at East Ferry in 1950.

The transformation to a more joyous – and more secular – holiday began in the mid-19th century.  In 1870, the federal government declared Christmas a national holiday – although the Jamestown post office was open in the morning and late afternoon.  The first mention in print of a Christmas tree and Santa Claus in Jamestown was 1874 when Santa visited the Sabbath School at the First Baptist Church, a church near Carr Lane founded by Seventh Day Baptists and united with the Central Baptist Church in 1905.

In the early 20th century, most of the public celebrations were at the churches. At Central Baptist Church on Christmas Eve in 1900 the children played games from 5 to 7, when the older people arrived and refreshments were served. The children each received a present, a bag of candy, and an orange.  St. Matthew’s Episcopal Church held its festivities Christmas evening. The children from the Sunday school sang carols and recited Christmas poems.  Afterward, the Christmas tree, which was decorated with presents, was stripped and the presents distributed to the children.  Dancing followed.  The First Baptist Church celebrated with a similar program – minus the dancing – on December 26. 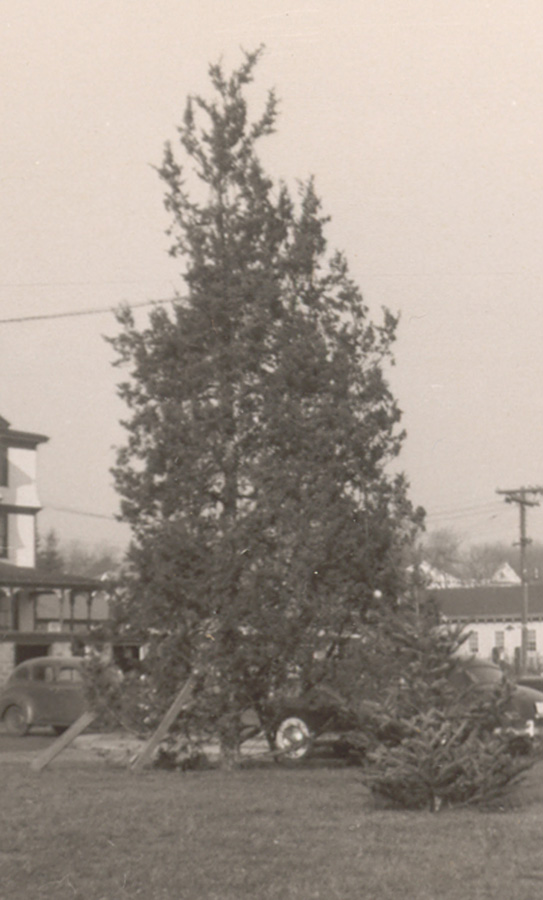 The first Christmas tree erected at East Ferry in 1950.

Over the next 50 years, more and more secular organizations organized public celebrations.

From the 1930s to the 1950s, the Jamestown Volunteer Fire Department lit a tree in the lot next to the fire station where the Valmont “Bucky” Caswell Museum now is.  On December 23, 1950, for the first time according to L. Sanford Crowell, the island druggist and organizer of the event, the lights on a community Christmas tree were turned on at East Ferry – a custom that has evolved into the present-day tree lighting.  The Jamestown Community Chorus, formed in 1949, sang.   To make the event even more festive, John L. Smith built an open fireplace near the tree and a giant Yule log burned in the fireplace throughout the evening.  Jamestown Rotary volunteers roasted chestnuts over the open fire and gave them to anyone who wanted one.

The PTA used its Annual Meeting and Christmas Party that year to introduce the details for a new school – the Lawn Avenue School, which opened in 1955.  Perhaps the School Committee was hoping the Christmas spirit would help them convince everyone that a new school was needed to educate the burgeoning “baby boom” population.

The 250 children at the Christmas party at St. Mark’s Roman Catholic Church were treated to a live nativity tableau as well as movies and carol singing.  Jamestown’s Brownie troop used their party to bring presents for wounded veterans at Newport Naval Hospital.  Most of the other parties followed still familiar lines – carol singing, Santa bringing presents for the children, and lots of food.

In 1975, a new tradition was introduced by Jeanne Bunkley.  Bunkley grew up in Bronxville, NY, where a live re-enactment of the nativity of Jesus at the manger in Bethlehem had been presented every year since 1914.  She staged a similar pageant for Jamestown at the Shoreby Hill Green on Christmas Eve.  In some years, 37 actors participated in the tableau, playing angels, shepherds, and wisemen in addition to the family of Joseph, Mary, and Jesus. Live animals from Jamestown farms, including sheep, a donkey, and sometimes a llama and goats, contributed to the realism of the scene. Carols told the story of Jesus Christ’s birth.

The 2020 holiday season was subdued by the COVID pandemic. The Christmas tree at East Ferry was lit but without the caroling and celebration that traditionally accompanied the event.  Many of the traditional parties and events were omitted.  In 2021, the Christmas tree lighting celebration was back, and the nativity reenactment is planned for Shoreby Hill.

This article is part of a series written by Rosemary Enright and
Sue Maden for The Jamestown Press. It appeared in December 2021.