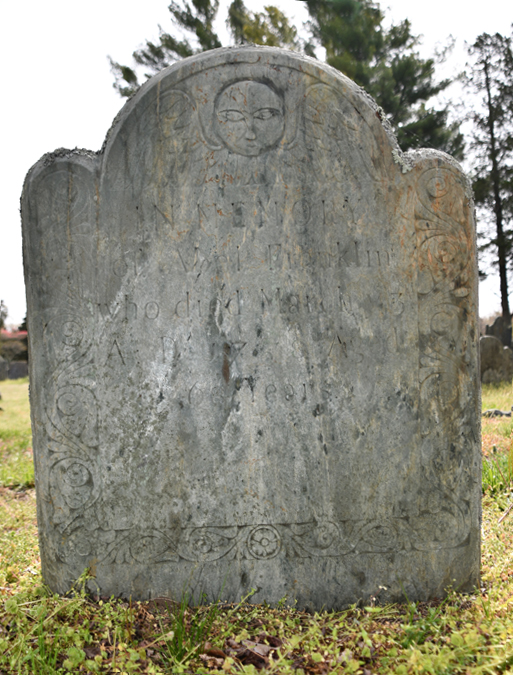 Have you ever walked through a cemetery and wondered about the people buried there?  Where they came from?  What they did?  Whether any descendants are still in the area?

A Cedar Cemetery tour was offered by the Jamestown Historical Society on Saturday, October 2, 2021 and introduced some of the men and women buried there.  The oldest part of the cemetery, the old Friends’ burial ground, was established by the Jamestown Quaker community in 1710.  Thomas Hazard buried his wife in a family plot abutting the Quaker burial ground in 1807 and six generations of Hazard descendants are buried close by.  In 1861, the non-sectarian Cedar Cemetery was laid out to the east of the earlier cemeteries and later incorporated them. 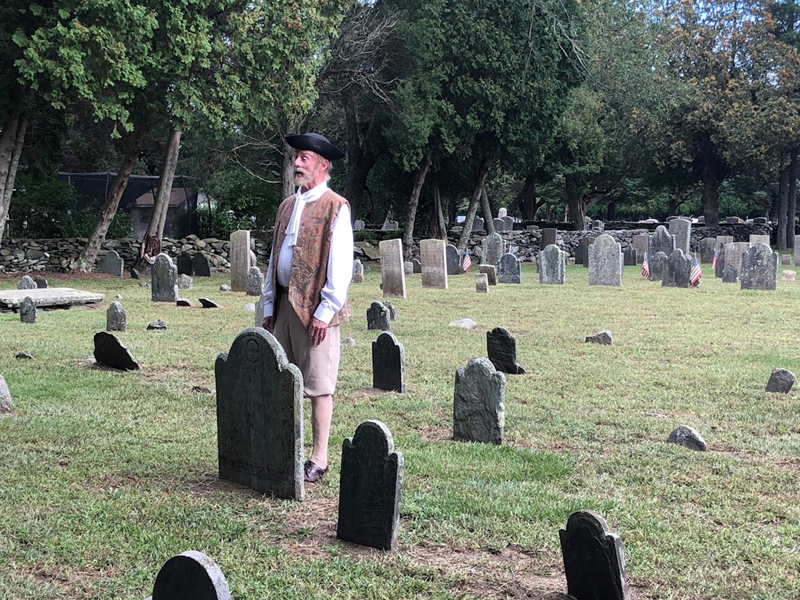 The oldest grave visited was that of Abel Franklin in the Friends’ Cemetery, where the interpreter in colonial dress told the story of the 18th century ferryman, farmer, and lighthouse keeper. 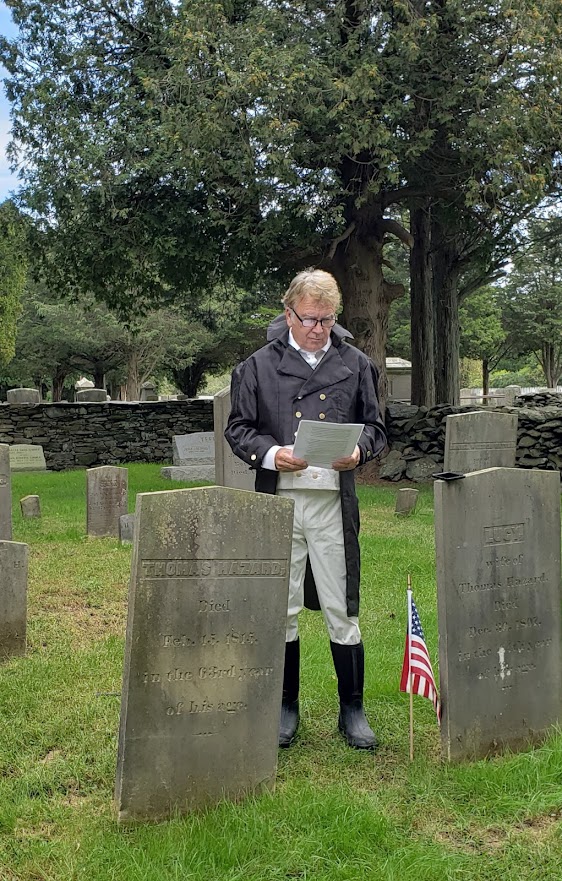 Thomas Hazard (1753-1815) founded the prominent 208-acre Hazard Farm on the northwest shore of Jamestown. The farm, bisected by North Ferry Road, was occupied by his Hazard/Tefft descendants for six generations across two centuries. Lucy Hazard Tefft (1837-1909), Thomas’s great granddaughter, was born on the farm and inherited it from her father. Their sons, Thomas and Jesse, were the last two millers at the Jamestown windmill. 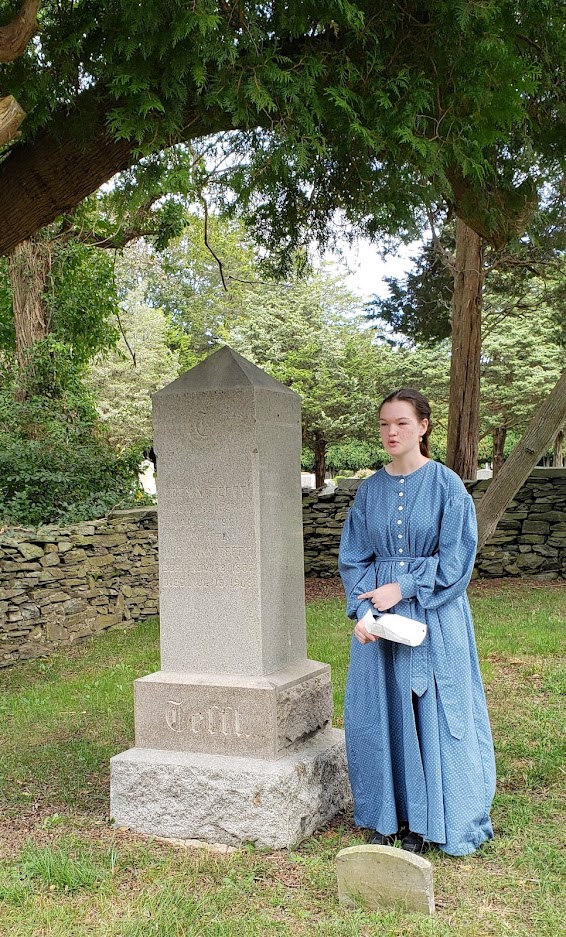 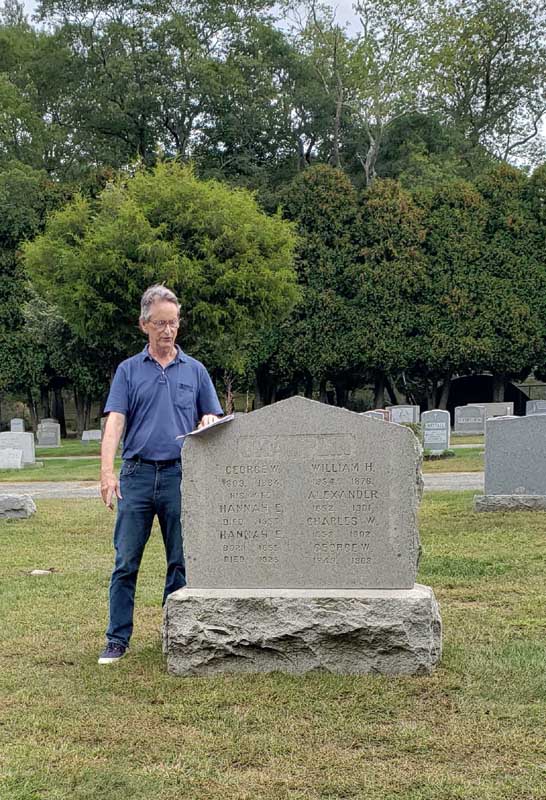 From the 18th to the 20th centuries, generations of Black Champlins worked the land of Jamestown. The final generation established the first known Black-owned farm on the island in 1872. The 12-acre Champlin farm surrounded to the north and east the then-tiny Cedar Cemetery. In the early 20th century, after most of the descendants had passed, the farm was sold and added to Cedar Cemetery, expanding its size six-fold.

While none of the Champlins married or had children, their headstone remains and their farmland, now the englarged Cedar Cemetery, endures undisturbed.

Left: Peter Fay tells the story of the Champlin family 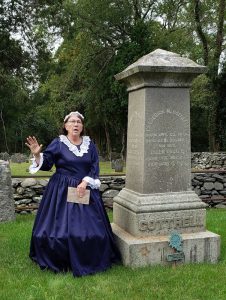 Ellen Tucker Cottrell (1847-1929) was born on a farm on North Main Road where her father Pardon Tucker worked. Ellen and her four siblings attended Jamestown’s South School and in 1862 Ellen continued her studies at Wheaton Seminary. She married Frederick Cottrell in 1867 and was widowed at the age of 36.  She built a house on Brook Street where she became active in town affairs, often in defense of moral rectitude. In 1907 she was appointed to the board of female visitors to institutions where women were confined. 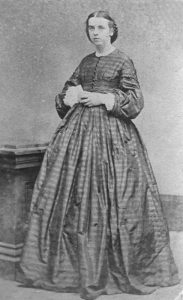 Lena Clarke (1867-1955) was a descendant of Joseph Clarke (1618-1694), one of the original purchasers of Conanicut Island. In 1882, Lena’s father became superintendent of Jamestown schools and following in the footsteps of her father, began teaching in the one room school house that is now the Jamestown museum. She was a charter member and first president of the Jamestown Historical Society. When she retired in 1938, Lena had taught three generations of Jamestown children and was principal of the Carr School. 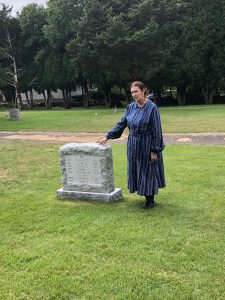 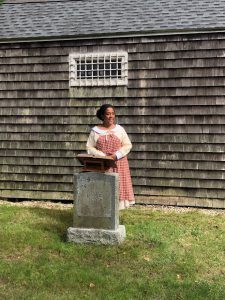 Olivia Johns Rice (1880-1973) was born in Cleveland, OH into a prominent Black family. In her 20s, college-educated Olivia taught grade school and in 1910 she married Frank Rice who was descended from an eminent Black family in Newport.  Frank’s grandfather was a caterer and founding member of the Newport Anti-Slavery Society. For 44 years Frank served as caretaker of the Hazard summer house on Walcott Ave. After Frank died in 1937, Olivia continued living on and caring for the Hazard property until Hazard died in 1961, leaving Olivia $100 a month for life 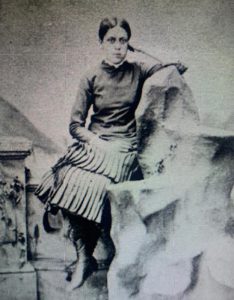 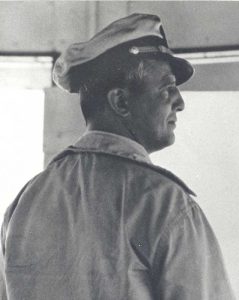 Captain William Pemantel (1918-2000) was the youngest of 11 children born to Angelina and August Pemantel who had come to Jamestown in 1909 from the Portuguese Azores. Bill went to Jamestown schools through sixth grade and then began working on boats in Narragansett Bay. By his 20th birthday he was a seasoned mariner and bay pilot. After World War II he went to work for the Jamestown & Newport Ferry Co. Groomed by Captain Reuben Garlick, he quickly gained his master’s license.  Captain Pemantel guided ferries between Jamestown and Newport for 27 years until the ferries were discontinued in 1969, often taking his son and other children with him in the wheelhouse. 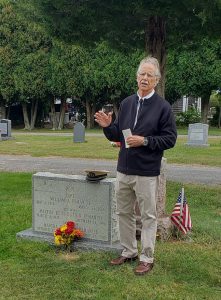 You can find more in-depth information of all the individuals represented here by contacting info@jamestownhistoricalsociety.org and request the brochure that was handed out at the event.  A big thank you is extended to everyone who participated in creating the tour specifically in the research, the tour guides, the interpreters, the planning, the costumes, the photography and the display and support.