Golf became popular in the United States in the late 1880s and Jamestown’s summer residents were among the earliest enthusiasts.  In 1893, Mary and Ellen Macauley who summered in “Mist” on Racquet Road, Brooks Stevens, and D.C.W. Falls began the process that would result in the formation of the Conanicut Golf Club and the creation of Jamestown’s first golf course.

The four founders came up with a simple set of membership rules that would become – with some significant changes – the bylaws of the club when it officially formed in 1895. 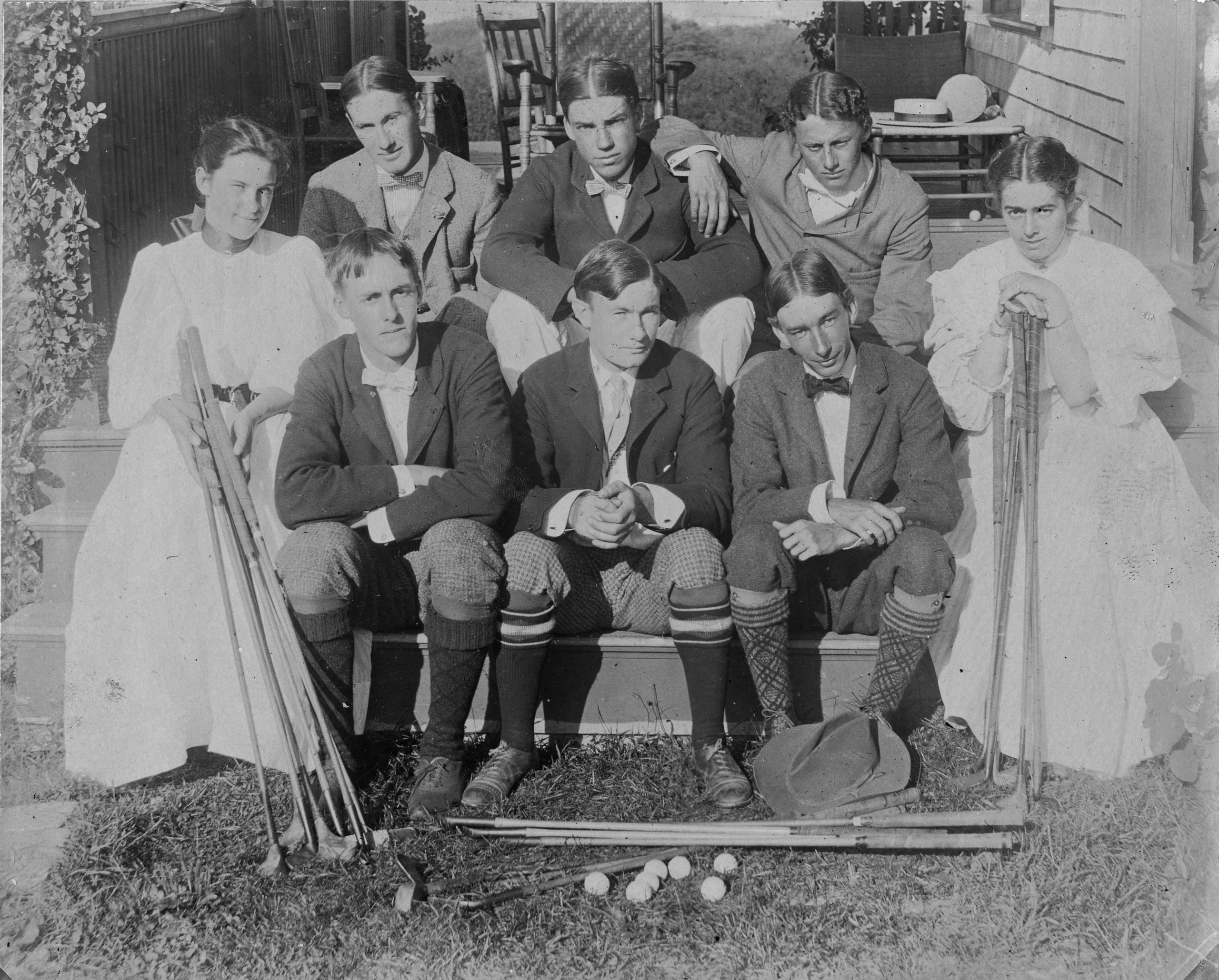 “Rule I That the membership shall be limited to 24 – or two members for every hole.”  Evidently the group anticipated at 12-hole course.  In the end, only 9 holes were laid out.  The number of active members allowed was quickly expanded to 50 and later to 75, and an associate membership was established.

“II The membership shall be limited to residents of Jamestown, R.I.”  “Resident” was defined –after several years of discussion – as “a member of a family that owns a cottage or has hired one for the season.”  (Obviously, no year-round Jamestowners were expected to apply for membership.)

“III No stranger shall play on the course unless accompanied by a member.”  This was later expanded to provide a way for guests of members to play without the member present.

“IV There will be no annual dues or initiation fees, but the Club shall be assessed when money is needed.”  This provision proved totally impractical.  The bylaws set the initiation fee at $2.00 and provided for an annual assessment to be set by the Executive Committee.

“V. No one can be elected to fill a vacancy in the club except with the entire consent of the Club.”  A couple of years into operation of the organization this was changed so that two “black balls” were needed to refuse admittance and a vote of “indifferent” was introduced, with three “indifferent” equally one “black ball.”

The four founding members knew that it would take a while to build the course and attract members to the club.  They set a goal of 1895.  By 1894, the nascent club had 16 members.

On July 6, 1895, 12 members met at Dr. Oliver F. Wadsworth’s house to formalize the bylaw, which in addition to the membership rules, included rules for governance.

Most of the members of the new club lived in the Dumplings and the course for the Conanicut Golf Club was laid out south of Hamilton Avenue, mostly on the pastures of the Cottrell Farm.  Six holes were west of Walcott Avenue, north of Blueberry Lane on the 55 acres now owned by the Hutchinsons and the Conanicut Land Trust.  Three were further east on land that belonged to the Ocean Highlands Company.  The fairways for these paralleled or crossed the then unpaved Walcott Avenue.

Some of the rules of play for the course reflect its rough design:

“Free lift out of all ditches within bounds… “

“Optional free lift out of all roads within bounds only.”

“Free lift for all balls if that are resting against exposed pipes.”

“Free lift out of piles of soil and ground under construction within bounds.”  (This rule also applied to cow patties since a bull roamed the field when golf was not being played, and the farmer charged an extra $8.00 annually to confine the bull when called upon to do so.)

As development along Highland Drive increased and construction of Fort Wetherill began in the late 1890s, playing the holes near Walcott got risky.  Then in 1902, the Cottrells more than doubled the rent on the western pasture.  The use of the Highland lands was discontinued, and the course was reduced to six holes.

The reduction came at a very bad time.  The Jamestown Golf and Country Club had been incorporated on July 26, 1901, and officially opened on August 3, 1901.  In 1902, Alexander H. Findlay, one the earliest acknowledged golf course architects, created a nine-hole course.  A clubhouse was planned.

The smaller golf course could not compete.  In July 1904, RAdm Thomas O. Selfridge Jr. (ret), who had been serving as club treasurer for several years, reported a total of $79.71 in the club account.  No record is available for 1905. But in July 1906, he recorded that the same amount, plus $8.04 interest, was on hand, indicating that the club essentially ceased to exist in 1904.

This article is part of a series written by Rosemary Enright and
Sue Maden for The Jamestown Press. It appeared in October 2021.