The August exhibit in the JHS library display case features early gifts to the Jamestown Historical Society’s collection and the people who gave them.

The first object donated to the collection was presented at the second meeting of the society on August 26, 1912, by William Lincoln Bates, owner and director of Dr. Bates’ Sanitarium and an organizing member of the JHS.  The paper currency issued by the United States Postal was worth 50 cents.

Other paper currency came in from other early members.  Scrip issued in 1776 by the Massachusetts Bay colony for 4 pence was donated Isabella Weeden Hull, who lived on a farm on North Main Road near what is now Jamestown Shores.  A 30-shilling note issued by the colony of New Hampshire in 1775, along with the campaign ribbon and button from William Henry Harrison’s 1840 presidential campaign, were donated by Louise Atkinson, who lived at the corner of Greene Lane and Friendship Street.

Newspapers, a children’s book, and the incorporation papers for the society are also on display. 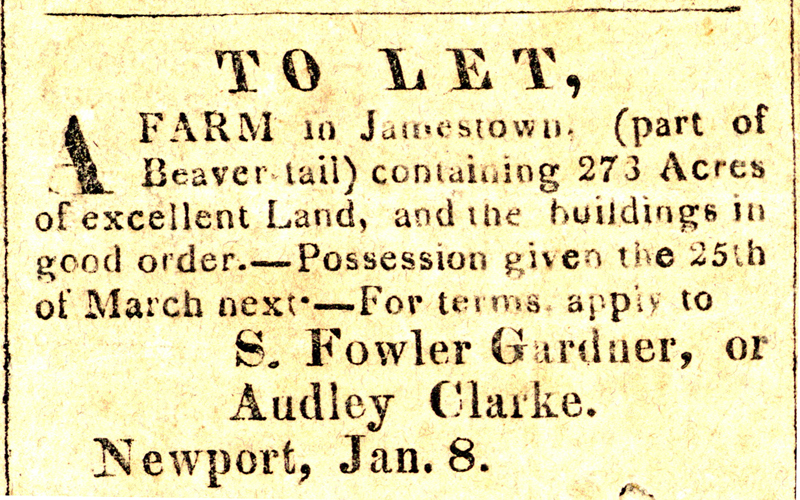 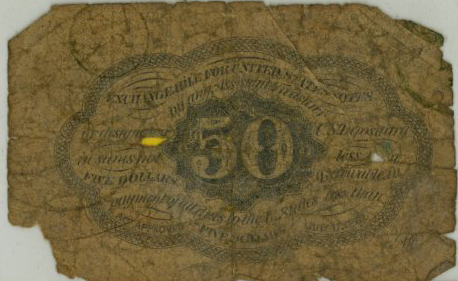 Above left: Copy of the Newport Mercury from Saturday, January 15, 1820. On the front page is an advertisement for the rental of a farm on Beavertail. The newspaper was the gift of Mary Howland Clarke, the widow of David Otis Clarke. Mrs. Clarke was in her mid-80s at the time of her gift, which was actually presented to the society by her daughter Flora, Mrs. C.E. Weeden.

Above right: United States Postal currency, 1862, worth 50 cents, donated by William Lincoln Bates. Dr Bates was the owner and director of Dr. Bates’ Sanitarium, also known as Maplewood, and an organizing member of the Jamestown Historical Society. It is the first object donated to the collection. It was presented at the second meeting of the Society on August 26, 1912. 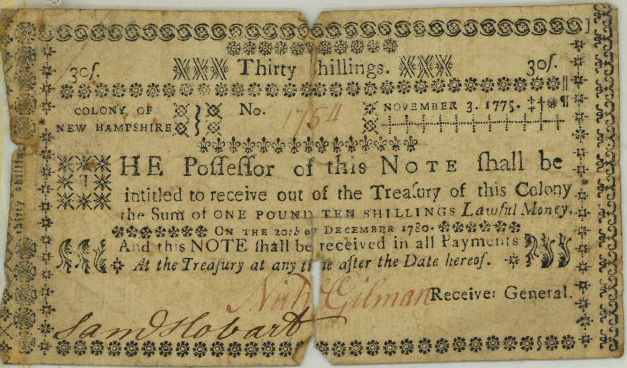 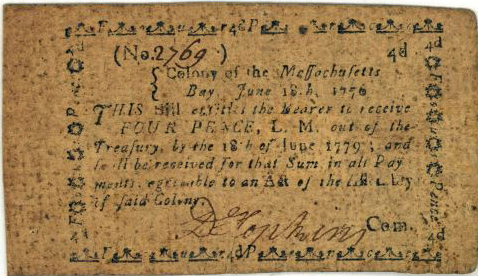 Above left: A 30-shilling note issued by the colony of New Hampshire in 1775. The note, along with the campaign ribbon and button to the right, were donated by Louise Atkinson. Miss Atkinson also loaned the society several objects, including a pair of 1741 wedding slippers, for its first exhibit/fundraiser in August 1913.

Above right:  Scrip issued in 1776 by the Massachusetts Bay colony for 4 pence. The donor, Isabella Weeden Hull, was born in Jamestown and lived with her husband Benjamin E. Hull on a farm on North Main Road near what is now Jamestown Shores

Left: Paper money worth 50 cents issued in 1875. The scrip was donated by Mrs. Richard Viall, the widow of one of the founders of Brown & Sharpe, who lived at Dr. Bates’ Maplewood Sanitarium for the last 10 years of her life. She was a director of the Jamestown Historical Society and active in the early restoration of the Jamestown windmill.