In the 19th century – before the invention of the movie, television, and computer – most people, especially in tiny towns like Jamestown, had to make their own entertainment.  Fraternal organizations that provided social activities as well as mutual support and/or intellectual stimulation flourished.  Among these organizations were debating societies. 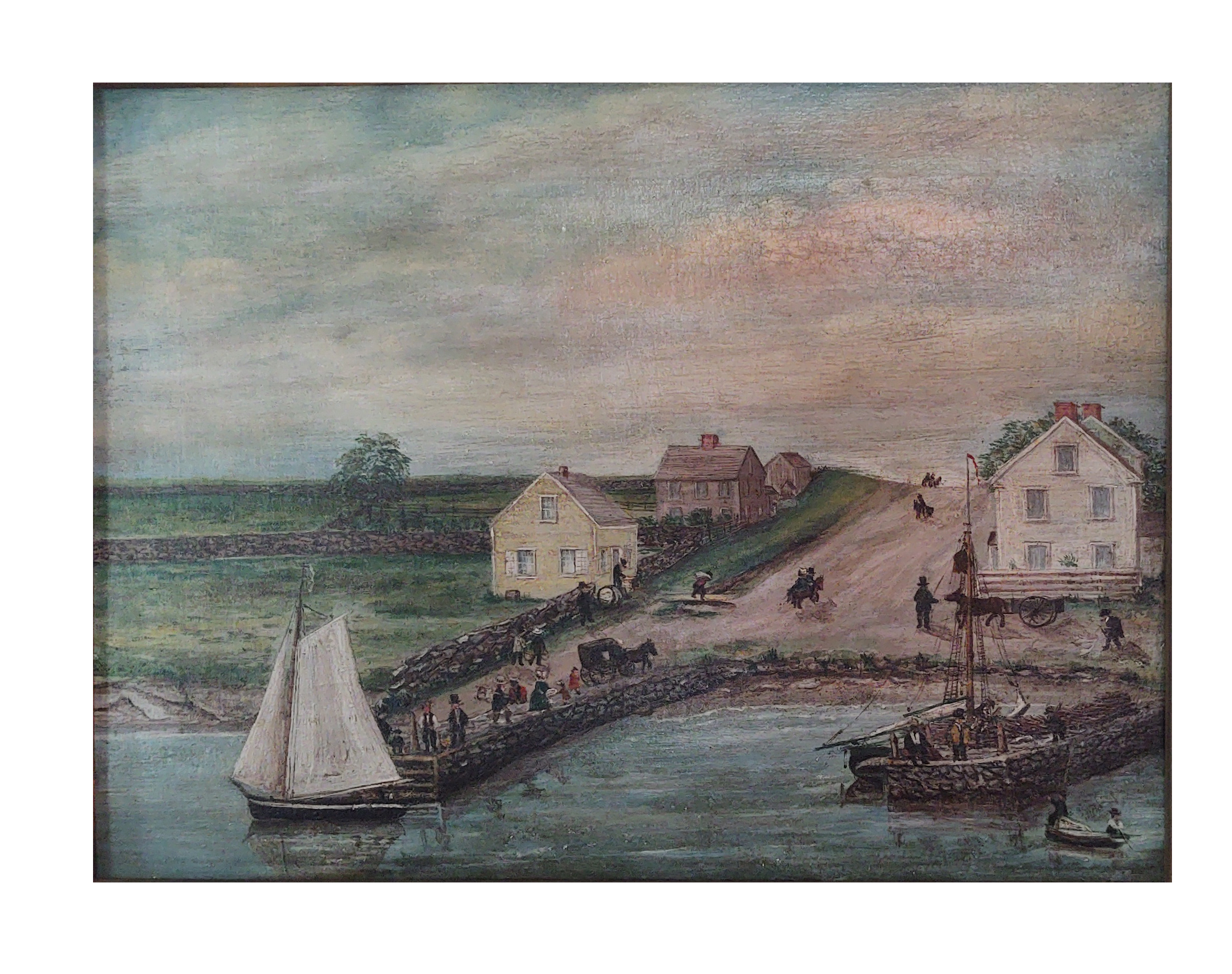 Jamestown about the time the Peithomenian Debating Society was active. Ferryboat (with white streak) and wooden boat from Wickford at East Ferry [1841-1846]. Painted by Chas D. Hammet of Newport, note the Ferry House on the right.

Debates organized by the debating societies were not free-for-all discussions of general topics but formal arguments for or against a specific proposal.  Two teams, usually of three or more members, were formed – one team for the proposition, the other against.  Other club members sat as judges.  The judges evaluated the arguments presented for logic, accuracy, and, to some extent, emotional appeal and declared whether the affirmative or negative team had won. Club members and non-club members attended, listened to the debates, and – in some cases – overthrew the judgment of the official judges.

We know of at least three debating societies in Jamestown:  the Philomenian Society, founded in 1824 with its name rooted in the Greek word for love; the mid-19th-century Peithomenian Debating Society, named for the Greek goddess Peitho who personifies persuasion and seduction; and the early 20th century Fire Laddies Debating Club, formed by the members of Jamestown’s Volunteer Fire Department.

The Peithomenian Debating Society, made up mostly of farmers in then primarily agricultural Jamestown, met only in the winter months, from November to March.  Forty-five debates were held between December 1847 and March 1851.  The propositions put forth were generally structured as questions.  We don’t know the substance of the arguments presented, but both the questions and the success of the arguments can help us to understand something about the mindset of Jamestowners 175 years ago.

Many of the debates were on general, philosophical topics – for example, “Does wealth exert a greater influence than wisdom?” and “Are works of nature superior to works of art?” About half, however, dealt with issues of the day.

As would be expected only 10 years before the American Civil War, six of the debates involved slavery.  Twice the club members debated whether the African Negro had received worse treatment from the white man than the Indian had.  The first time the debate was decided in the affirmative.  The second debate lasted for three meetings – the only one to be carried over two meetings – and was decided in the negative.

Two of the other questions – no matter how they were decided – reveal an ambivalence toward abolition.  “Will a dissolution of the union be a greater evil than the extension of slavery in the new territory?” and “Had the fugitive slave act ought to be enforced?” received “yes” answers, although we should remember that the outcome of a debate reflects the abilities of the participants to impress the judges with their arguments rather than necessarily their argument’s validity.

The Jamestown Temperance Society had been founded in 1831 and the other two debates involving slavery reflected this community interest.  Both debates about whether slavery was a greater evil than intemperance determined that slavery was, indeed, the greater evil.  Pride and war – another two debates determined – were also worse than intemperance.

The two debates that focused on how to enforce temperance are reminiscent of current debates on marijuana.  Licensing versus prohibition was decided in favor of prohibition, but the imprisonment of those convicted of selling alcoholic beverages was rejected.

One of the last debate questions recorded in the Peithomenian Debating Society records is “Is woman capable of as much attainment as man?” It was decided in the affirmative.

Not all the debates seem to have proceeded calmly. A note with the March 13, 1849, debate on the question “Who is the most contaminated by evil communications: the communicator or the one to whom evil is communicated?” explains that the debate was not decided because the club president William Knowles resigned from the society in the middle of the debate.

This article is part of a series written by Rosemary Enright and
Sue Maden for The Jamestown Press. It appeared in May 2021.