In the mid-19th century, the population of Jamestown was declining. The 1870 census counted only 378 people living here.  Those remaining knew the town would die if nothing were done.

In 1873, the town and some of its major landowners formed the Jamestown & Newport Ferry Co. and started the first steam ferry service to Newport, convinced that easier access would bring people to the island.  Development of the area around the new ferry wharf at the end of Narragansett Avenue followed quickly.

John Howland, one of the founders of the ferry company, owned the land just south of the ferry wharf.  He platted Union, Lincoln, and Friendship streets in 1874.  About a half mile north of the ferry was his brother Isaac’s farm, bounded by the Greene Farm on Shoreby Hill to the south, what is now the golf course on the west and north, and the bay to the east.  Uninterested in developing the area himself, Isaac sold his land to Peleg Bryer of Newport. The deed included a right of way through the farm, which became Conanicus Avenue, and an agreement that the new owner would farm the land for at least a year. (Because of legal issues, the intervening Greene Farm would remain undeveloped for another 20 years.) 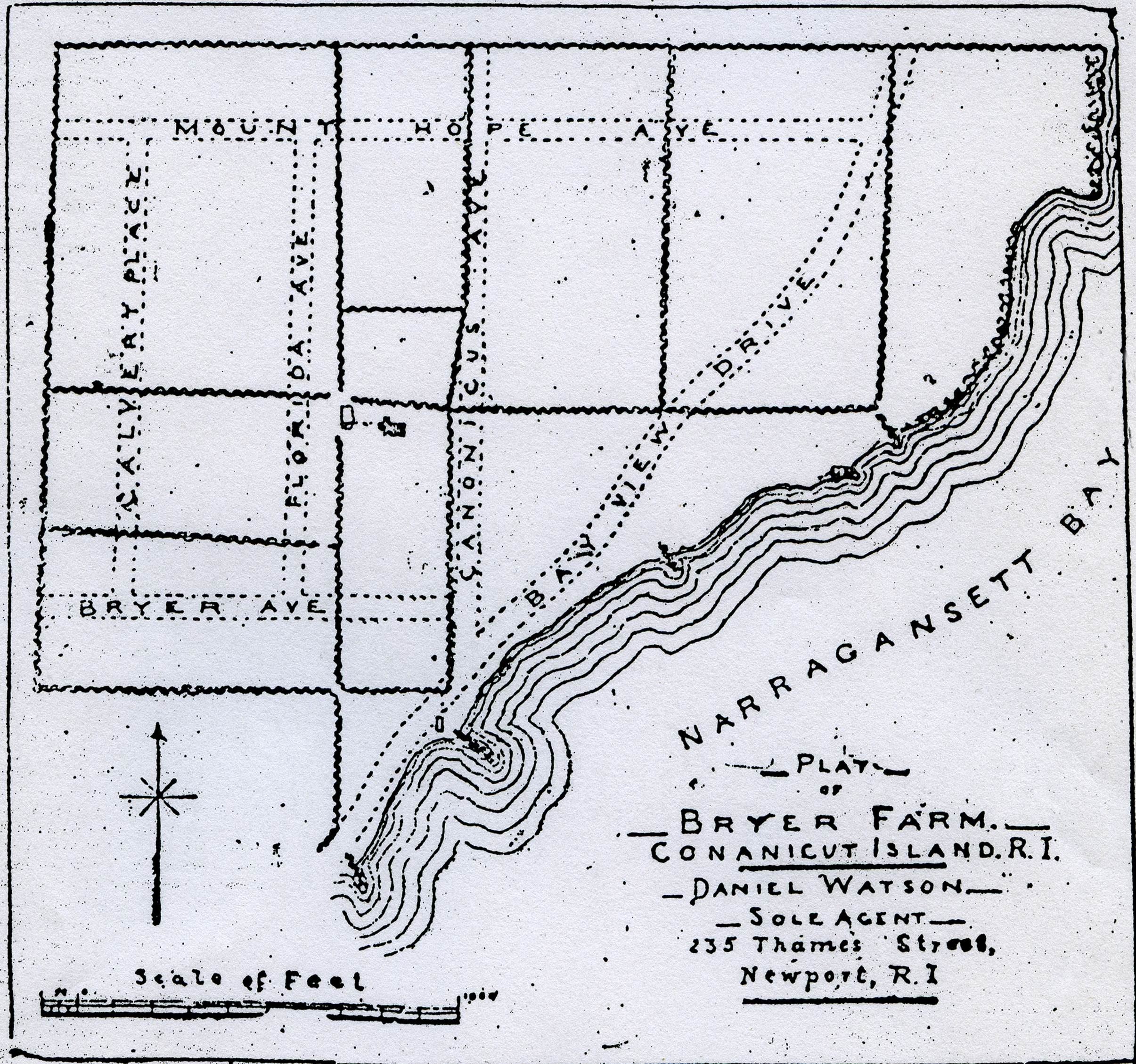 A little over a year after he bought the property, Peleg sold it to his son Benjamin. Benjamin was born in Newport in 1833. When he was 15, he went to New York to work for John Caswell & Co., a tea importing business that was owned by another native Newporter.  Bryer acquired the business on Caswell’s death and operated it very successfully for many years.  At the time of his death in 1898, he was one of the most respected tea merchants in New York City and was frequently called upon to act as arbitrator for the federal government in decisions regarding the importation of teas.

Benjamin Bryer does not seem to have taken a personal interest in his Jamestown property and for a decade the only house on the 85-acre farm was the old Cory farmhouse, now part of the apartment complex at Davis Street and Conanicus Avenue. In 1884, Daniel Watson, Jamestown’s premier realtor colloquially known as “Real Estate Dan,” took over as sole sales agent.  The first recorded sale in the plat is of a building site on the southwest corner of Conanicus and Bryer avenues to Dr. David Kindleberger, USN, in 1885. Over the next decade, several large summer houses were built on the waterfront lots along Bay View Drive.

The plat was not limited to residential development.  In 1889, the Champlin House, later Dr. Bates Sanitarium, was built on Conanicus Avenue just north of Bryer Avenue.  The same year the Bay Voyage Inn was floated across the bay from Middletown to a site between the Champlin House and the water.  In 1890, the hotel was expanded from ten to forty bedrooms.

Areas of the plat without water views did not sell as quickly.  John H. Caswell acquired the area west of Conanicus Avenue between Bryer and Mount Hope avenues.  In 1913, he decided to sell the remaining 172 platted lots, each approximately 5,000 square feet, at auction. On August 9, the Town Municipal Band led a parade of about 200 prospective buyers from Washington Square in Newport down to the ferry landing.  They were given free tickets for the ferry and once in Jamestown followed the band up Conanicus Avenue in a ragged procession to a large white tent erected on the site for the auction. 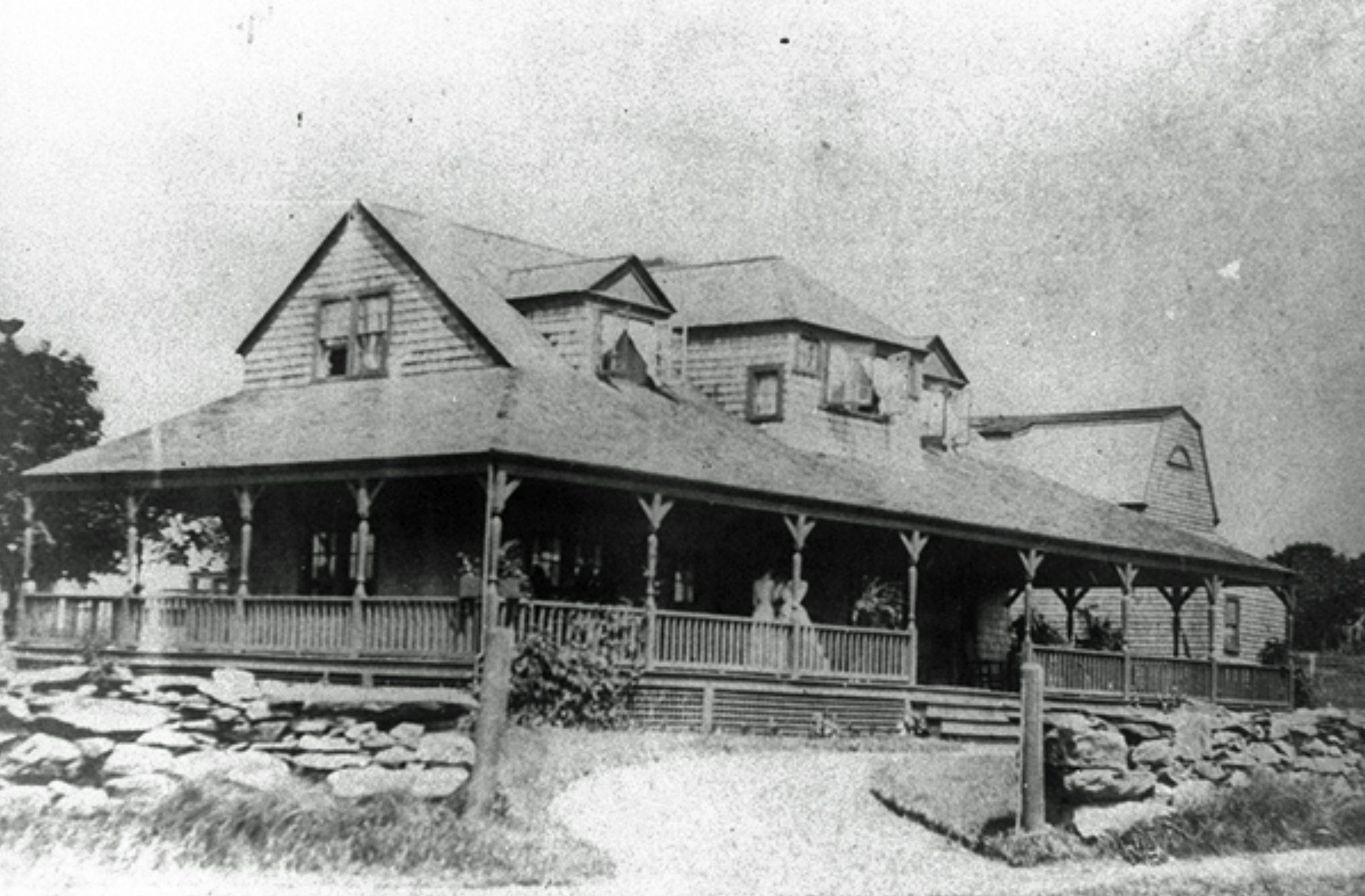 Beach Haven, the Kindleberger cottage, was the first cottage built in the Bryer Plat.  The house, much changed, is still at the southwest corner of Conanicus and Bryer avenues.

All the lots were sold, many buyers purchasing more than one lot.  The Newport Daily News noted that “The land went cheap … it is doubtful whether the desired $50,000 was raised.”  (The average price was two and a half cents per square foot.)

Over 10 years later, in 1925, the Conanicut Land Improvement Association was formed by a group of Jamestown businessmen to develop the final section of the plat, the property bordered by Conanicus Avenue, Bay View Drive, and Mount Hope Avenue. 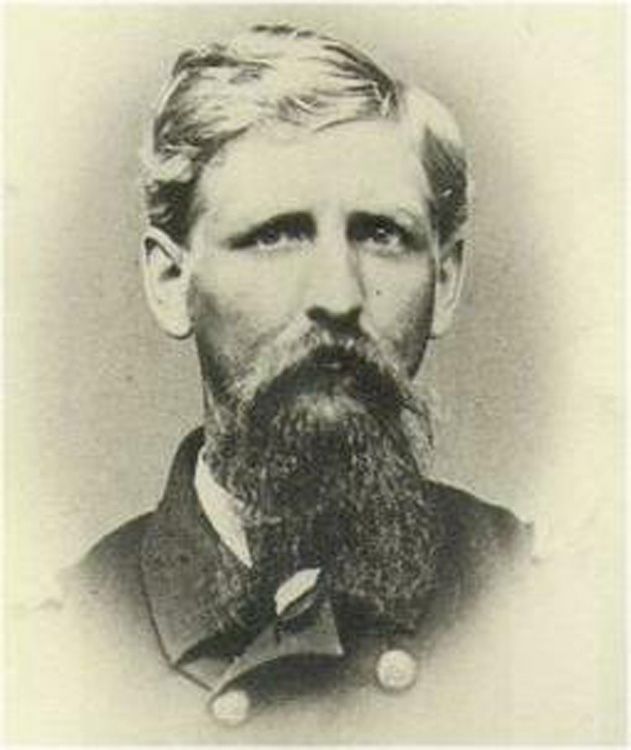 This article is part of a series written by Rosemary Enright and
Sue Maden for The Jamestown Press. It appeared in March 2021.