Francis X. West was an artist and painting contractor who worked from his Red Elephant Studio on Cole Street. In the JHS Collection is his artist’s palette with images of clouds, gulls, and sailboats. At the bottom of the palette is his autograph, “Frank West RES.” 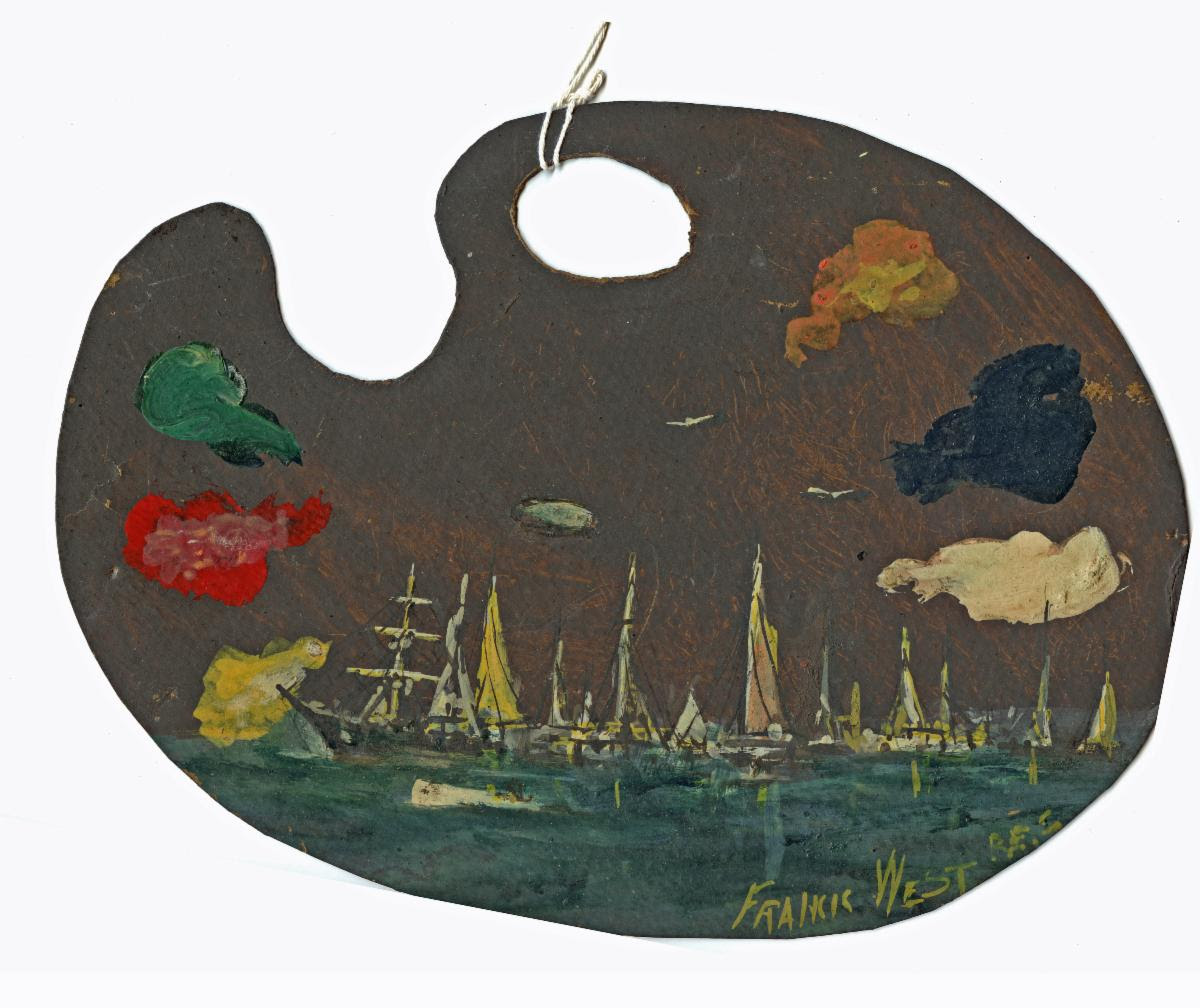 West was born in New York City, February 3, 1881, son of Mr. and Mrs. Leo Polusney. Although born Francis X. Polusney, he later adopted the name Francis X. West for professional purposes and sometimes used Frank West. He served in the Navy as an ordnance man during the Spanish-American War. He lived in Newport and then in Jamestown for more than 65 years before moving to Florida for a time. He died in Newport Hospital in 1971 at the age of 90. He was married to Lily F. MacKenzie West who died in 1967. The Wests had 4 daughters and three sons including Jimmy West of Jamestown. In a Jamestown Press article, Jimmy West said in the 1920s he was “working for his artist father, who was also an interior designer and a house painter” and went on to say his father lied about his age in order to join the war effort during the Spanish American War.

Best known as a marine painter, West worked in watercolor and oil. He was a member of the Newport Art Association where his work was regularly exhibited from 1938 to 1962. In 2011, the Jamestown Historical Society acquired West’s painting, Old Jamestown of the Jamestown waterfront. 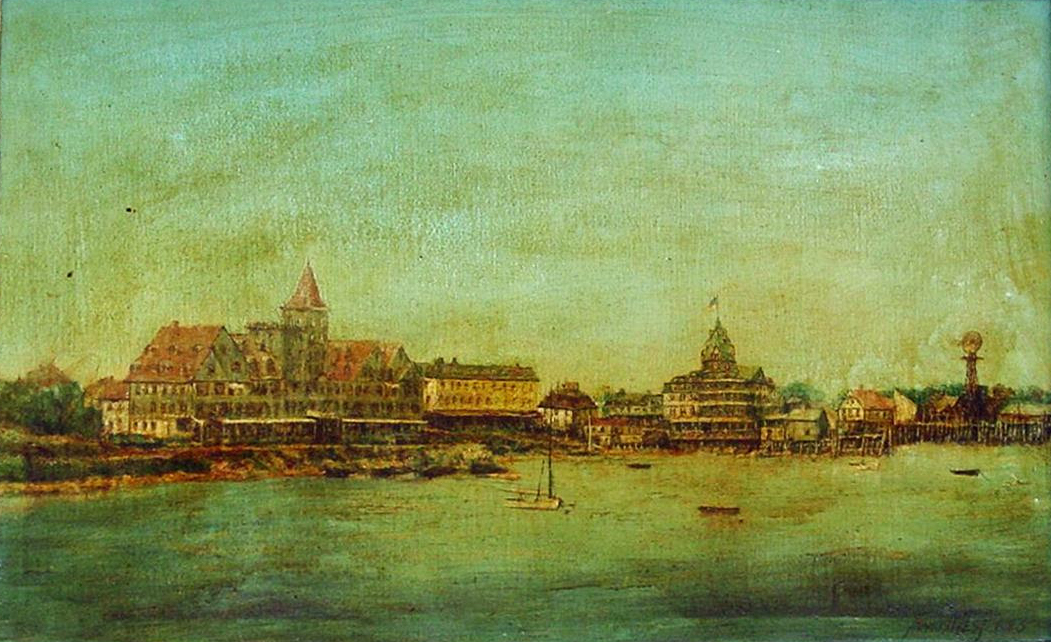 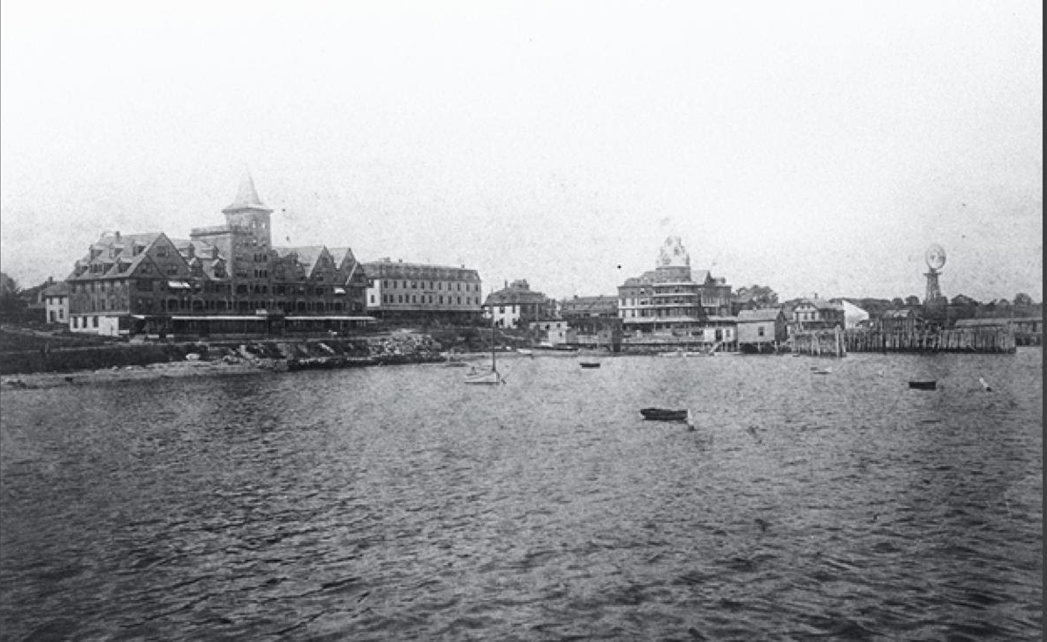 Old Jamestown (left) was probably painted, in the early 1950’s. The painting shows the Thorndike Hotel, Gardner House, Bay View Hotel, and East Ferry wharves with one sailboat in the foreground. Although only the Bay View Hotel remained when West painted the scene, he based the painting on a photograph in the JHS Collection that shows the East Ferry waterfront ca. 1900. If you look carefully, you may be able to see a windmill on the wharf north of the ferry landing.

In 1969, West’s family donated six of his marine paintings to the Mahan Library at the Naval War College. The Naval War College Museum confirms the paintings remain in their collection. Three of them, “The Columbus Fleet”, “Tompkinsville, New York” and “USS Constitution and HMS Guerriere” are currently on display in McCarty-Little Hall, an area not open to the public. The other three are not on display at this time and are being kept in their collections storage building.

Also in the JHS Collection is a miniature pastel of sailing boats painted by West. Handwritten on the back is “Red Elephant Studios, Jamestown, RI.” The Jamestown Philomenian Library has four of West’s paintings. Three paintings of sailing ships are on public display and the fourth of a coastal scene is in an office area.