From 1938 through 1940, the United States watched with growing concern the war that was engulfing Europe.  Air warfare directed against civilians, demonstrated in the Battle of Britain in the summer of 1940, led some – especially on the eastern seaboard – to fear for the vulnerability of our coastal communities. 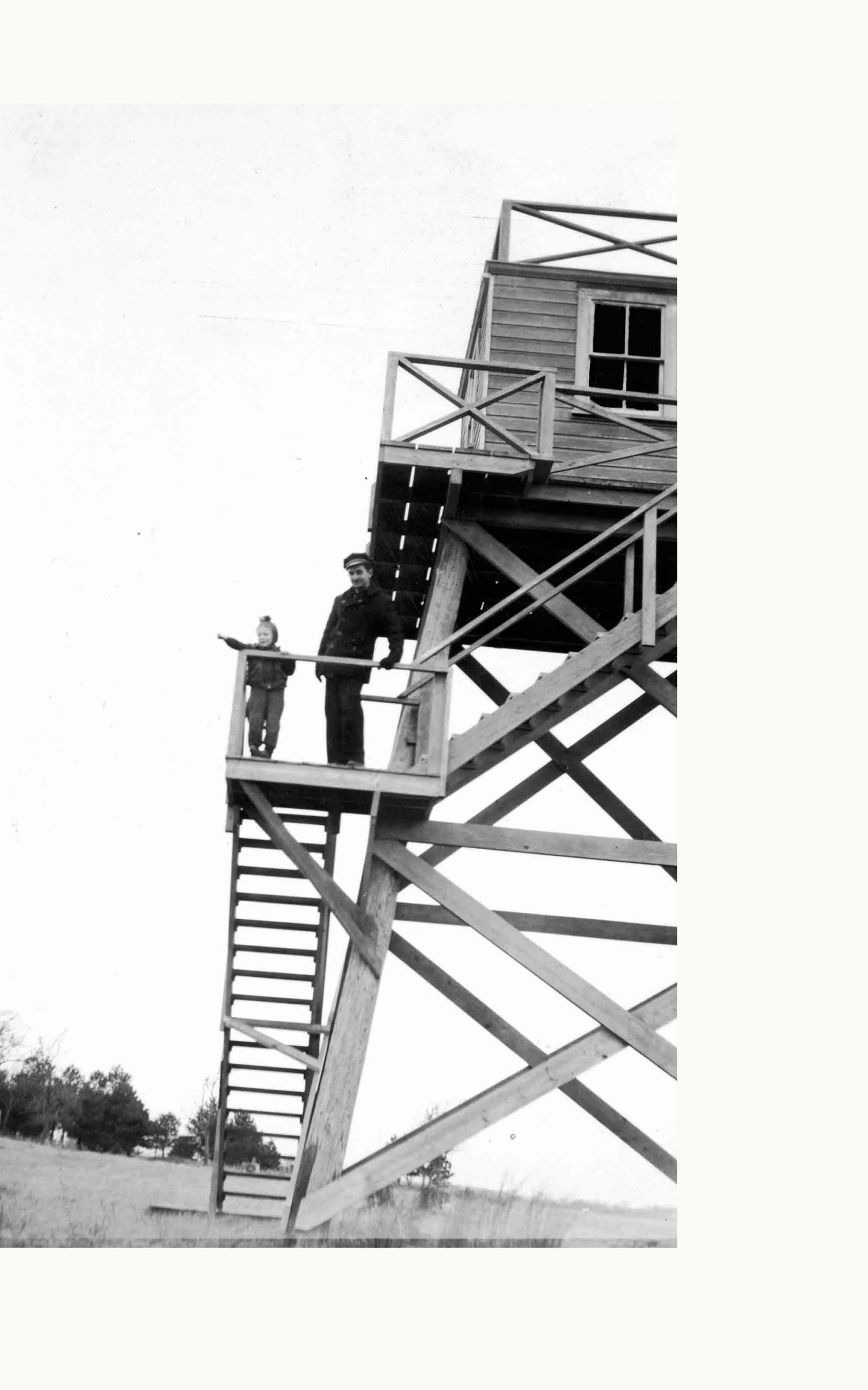 Harold Richardson and Lora White on the AWS observation tower near Watson Avenue after the deactivation of the air observer service.

In response, the American Legion developed a volunteer aircraft observation and warning system.  Volunteers were taught the silhouettes and configurations of various aircraft, and a communication system was put in place to relay information to the military.  In the spring and again in the fall of 1941, they conducted trials up and down the coast, including at Jamestown.

The Japanese attacked the U.S. Naval Base at Pearl Harbor on Sunday, December 7, 1941, forcing the country into the war.  Within days, the Aircraft Warning Service (AWS), built on the American Legion’s earlier system, established aircraft observation posts throughout Rhode Island.

Jamestown’s first post was set up at the home of Fire Chief Jesse C. Tefft on Cole Street.  Early in January, a more permanent observation post was created at the town-owned “crusher” on North Main Road between Frigate and Sloop streets.  The town moved a small building used by the WPA in the late 1930s to the spot and installed electricity and heat.  From inside this building at one of the highest points on the island, observers had an unobstructed view in all directions.

During the months that followed, more volunteers, among them teenagers too young to serve in the armed forces, attended six-session classes to learn how to recognize different aircraft.  On completion, new observers were certified, fingerprinted, and issued identification cards.  Observers putting in 100 hours of work were rewarded with armbands.  After an additional 100 hours, they received chevrons to attach to the armbands.  Pins and certificates were also awarded for service.

The observation post near the “crusher” was three miles north of the village.  In late July, at a special financial town meeting, voters approved funding to build an aircraft observation tower at the playground where the school now is to replace the North Main Road post.  The move brought the post closer to the homes of most of the observers since before the development of Jamestown Shores in 1947 the area north of Eldred Avenue was mostly farmland.

John Robert Caswell designed and built the new tower.   Steep stairs led up about 20 feet to a small building.  More steps could be climbed to the roof if a more panoramic view was needed.  The building, which housed the communications system, was heated.

The tower was cited throughout New England as an example of a perfect architectural setup.

The new aircraft warning observation tower was ready for use in mid-October with 56 observers scheduled.  The official dedication on November 22, 1942, was a formal affair.  Thomas F. Sheehan, president of the Town Council, and Georgianna Day, chief observer, spoke.  H. I. Newcombe, sub-district director of the AWS, described the organization of Rhode Island’s thirty posts.  Walter P. Jones, civilian director of the AWS for Rhode Island, spoke about the value of the service to Jamestown and to the country.  Lieutenant Colonel George Thompson, USA, emphasized the importance of manning the observation post 24/7.

Even as the tower was being dedicated, its usefulness was being questioned.  Training and retaining volunteers, especially during the winter months when Jamestown’s civilian population was greatly reduced and the teenage volunteers were in school, was a never-ending campaign that was opposed by those who felt aircraft identification was the military’s responsibility.  Others dismissed the risk of air attack.

The most important factor turned out to be the rapid development and deployment of radar.

Early in October 1943, less than a year after the dedication of the observation tower, the War Department deactivated the civilian AWS, announcing that “mechanical devises now in use, which detect planes long before they can be seen, make it no longer necessary to keep up the service.”

For two years, the air observation tower stood unused and empty.  In October 1945, two months after the Japanese surrender that ended World War II, the Town Council voted to raze the tower and to use the lumber to repair town-owned buildings.

This article is part of a series written by Rosemary Enright and
Sue Maden for The Jamestown Press. It was to have appeared in December 2020.