In honor of Veterans Day, we are excerpting a Civil War veteran’s story, edited by Rosemary Enright and Sue Maden.

Among the volunteers were Charles H. Clarke, who wrote the history of the company, and Jamestown’s Gustavus Adolphus Clarke. Both Clarkes served in the Navy later in the war. 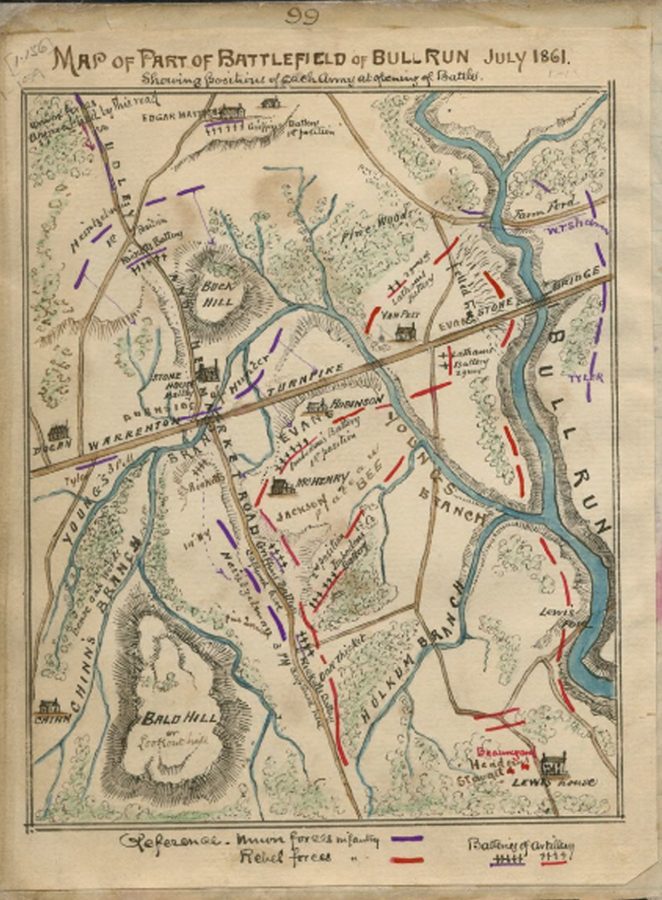 Map of the First Battle of Bull Run.  F Company was stationed on Buck Hill (upper left). Courtesy of the Library of Congress, Geography and Map Division.

When the orders came, Colonel George W. Tew was at work at his trade, a mason, on Wellington Avenue. On receiving the order he laid down his trowel and other tools, adopted the trade of a soldier . . ..

First Sergeant A. P. Sherman was driving on his market wagon attending to his morning trade when he heard the signal guns. Leaving his team on the street, he started at once for the armory on Clarke street, and commenced to form the company.

In less than one hour the company were in line and ready to start. Like the minute men of Revolutionary times, they left their bench, their desks, and farm, at the call to arms. . ..

[The company travelled by steamer to Annapolis and marched on to Washington.]

[T]he regiment was paraded in front of the Patent Office, the occasion being the raising of the Stars and Stripes on that building. The flag was hoisted by President Lincoln, after which the regiment was drilled by Colonel Burnside, under review by the President and members of the Cabinet.

The First Battle of Bull Run

The men, not being restrained of their liberty, roamed wherever they saw fit, and everybody, officers as well as men, appeared anxious to gobble up everything within their reach, (the term “stealing” in connection with it appeared to have become obsolete, there, articles looted being viewed in the light of spoils of war.) . . . One man of our company who had looted a large linen table covering was so afraid that some one would steal it from him, that he made a square package of it and secreted it inside his blouse, which act of his, whether meritorious or otherwise, doubtless was the means of saving a life at Bull Run the next Sunday, when Allen Caswell was wounded in the stomach, the force of the shot being broken by the aforesaid table covering.

Shot and shell were flying in all directions; we had lost a number of men, and the other companies of the regiment had suffered considerable loss. An officer now rode in front of our regiment and gave the order to cease firing, as we were shooting our own troops. The smoke, which had occasioned this, soon lifted in our front, when we discovered a regiment bearing the union flag marching up the hill in our direction. When a short distance from us, they gave us a volley, which we returned at once, when they turned and retreated down the hill. This regiment was the 4th Alabama, and their colonel, Egbert Jones, was carried to our field hospital, mortally wounded. With others of our regiment I went over the field after the firing had ceased, and our conclusion was that they were amply repaid for the cruel and unmanly deception practiced upon us. It was never known who the officer was that gave the order to cease firing; he appeared in front of our lines, mounted, with sword uplifted when he gave the order, which was recognized by our company officers, they mistaking him for an aide-de-camp or staff officer. It was, however, the opinion of many of the regiment at the time that he was a rebel officer.

Soon the firing in our front ceased. Our ammunition was all expended, we having been under fire for nearly four hours, and had driven the enemy from that portion of the field. This position, from which we had forced the enemy to retire, and which we then held, is known as Buck’s Hill, and was regarded as a position of much importance for our forces.

Orders were received to make preparations for return to Rhode Island, as our term of service had expired.

[The company travelled by train to New York via Baltimore and Philadelphia. At New York, they boarded steamboats for Providence]

We steamed out of New York at about 11 A. M., the transports proceeding slowly to avoid arriving in Providence at a late hour in the day. At 10.30 P. M. we were off Beaver Tail light; F Company was called and formed on the hurricane deck, Captain Tew arranging with the steamer captain to sail through the inner harbor of Newport. When opposite Fort Greene, a squad of the Newport Artillery fired a salute, which was answered with cheering by F Company, and the blowing of the steamer’s whistle. Both steamers proceeded up the bay and anchored, it being the wish to not land before daylight.

This article is part of a series written by Rosemary Enright and
Sue Maden for The Jamestown Press. It was to have appeared in November 2020.