Gustavus Adolphus Clarke, known as G. Adolphus, was one of Jamestown’s many descendants of Joseph Clarke, one of the original purchasers of Conanicut Island.  He was born in Jamestown in 1839, eighth of the nine children of David Wright and Sarah Chaffee Clarke.  He was in his mid-teens when his father died and his mother moved with the younger children to Newport. 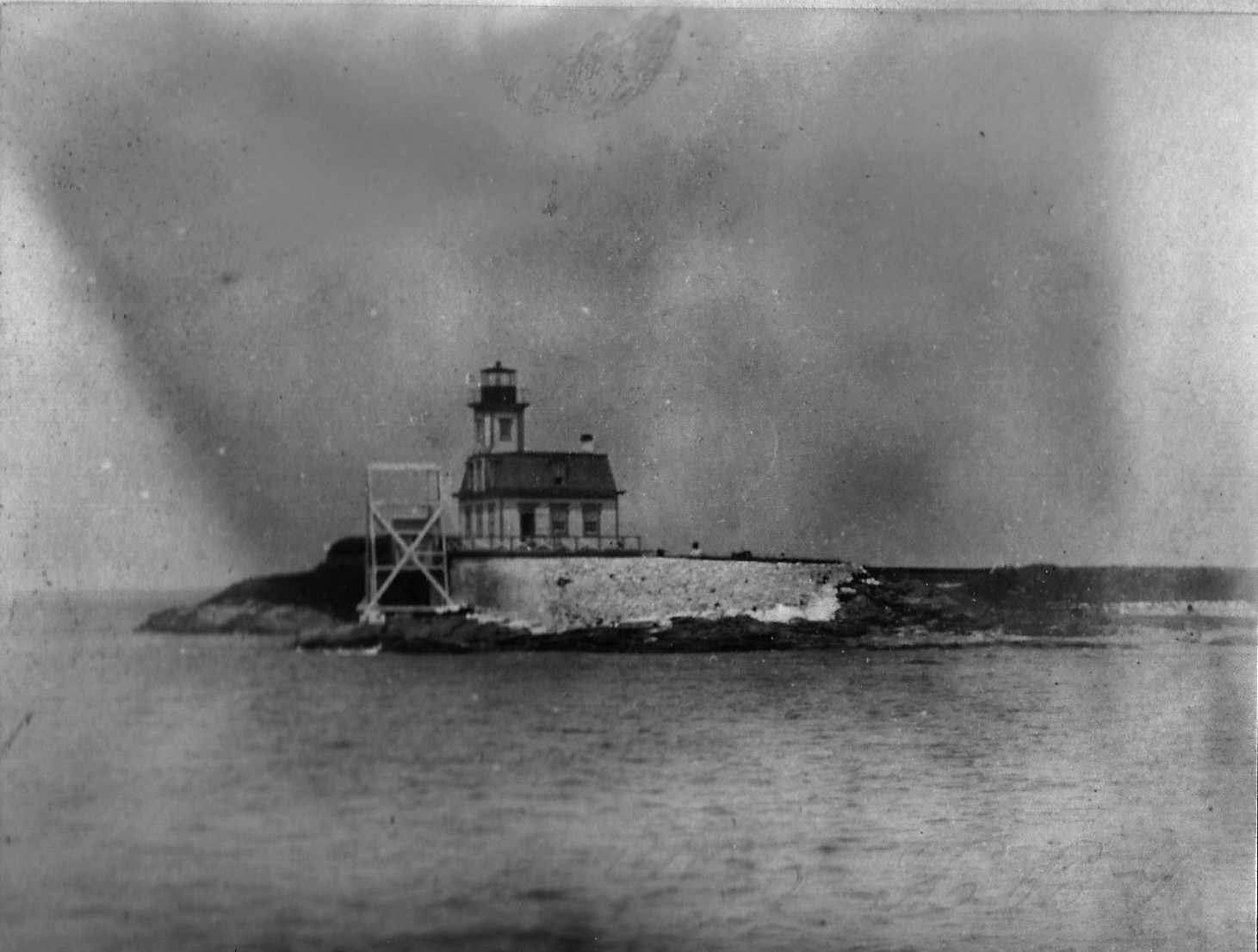 Rose Island Light in 1889, shortly after Clarke’s tenure as keeper there.  From the Jamestown Historical Society Rosengarten Collection,.

Whatever plans the young G. Adolphus had for his future were interrupted by the onset of the American Civil War.  Five days after Confederate guns around Charleston Harbor opened fire on Fort Sumter on April 12, 1861, he enlisted as a Private with Company F, 1st Regiment, R. I. Volunteers.

Almost immediately, the company set off for the front.  In mid-July, they fought in the First Battle of Bull Run in Manassas, Va.  Then, with their three-month term of enlistment completed and – despite the defeat at Bull Run – still of the opinion that the war would be won quickly, they returned to Rhode Island and were mustered out.

As the war continued, the young man found a different way to express his patriotism.  On August 6, 1862, Seaman’s Protection Certificate #12 was issued to “Gustavius R. Clark,” 22, of Jamestown by the Newport Customs Office.  Under a 1796 law, customs collectors were directed to maintain a record of all United States citizens serving on United States vessels.  These certificates vouched for the citizenship of the individual.  After serving on a clipper ship for a trip around the Cape of Good Horn, Clarke enlisted in the navy, serving from February 1863 to March 1866.

On September 18, 1872, G. Adolphus married Hannah Carter Carr.  Hannah was a descendant of Caleb Carr, another of Jamestown’s first proprietors, and had grown up at the Carr family homestead on Carr Lane.  Clarke became the purser on Jamestown’s first steam ferry, Jamestown, which began service between Newport and Jamestown in 1873 and then sought appointment as a lighthouse keeper.

In the 18th and most of the 19th centuries, lighthouse keepers were political appointees. Although in 1852 the United States Light-House Board had issued rules about qualifications and conventional wisdom suggested that the best keepers were old sailors, political clout and military service still influenced appointments.  Clarke, with his Civil War service and a brother who was superintendent of schools in Newport, had some of each and he was appointed keeper at Rose Island Lighthouse in 1879.  The family lived on Rose Island until 1887.

The couple had three children.  Edith was born in 1873 and, as so often happened in the 19th century, did not survive her first year.  Clarence was born 1877 in Jamestown, and his third child, Celia Elizabeth, was born in January 1882 while the family was on Rose Island.

Clarke’s eight years on the island are notable for his conservation efforts.  Rose Island was known as Conockonoquit by the Narragansett or “place of the long point.”  The long point was a grassy meadow at the northernmost point of the island.  During his tenure on the island, Clarke pleaded with the authorities to protect the meadow with sea walls to prevent erosion, but his pleadings went unheeded.  The great Portland gale of 1898 reduced the grassy cow pasture to the tidal flat that can be seen today only at low tide.  Prior to the gale the island measured approximately 23 acres in size; today it measures only 18 acres, a loss of 5 acres.

Clarke returned to Jamestown. He bought a house on Narragansett Avenue and opened a fish market.  The market was probably seasonal, and for several years he also worked as a freight clerk for the Jamestown & Newport Ferry Company.  He immersed himself in the life of the town and was one of the founding members of the Conanicut Grange in 1889.

He continued to take pride in his service in the Civil War and was an active member of the Company F Association.  At the 1909 annual meeting and reunion of the association, he was one of 11 of the 19 surviving members of the unit present and was elected president for the ensuing year.

This article is part of a series written by Rosemary Enright and
Sue Maden for The Jamestown Press. It appeared in October 2020.