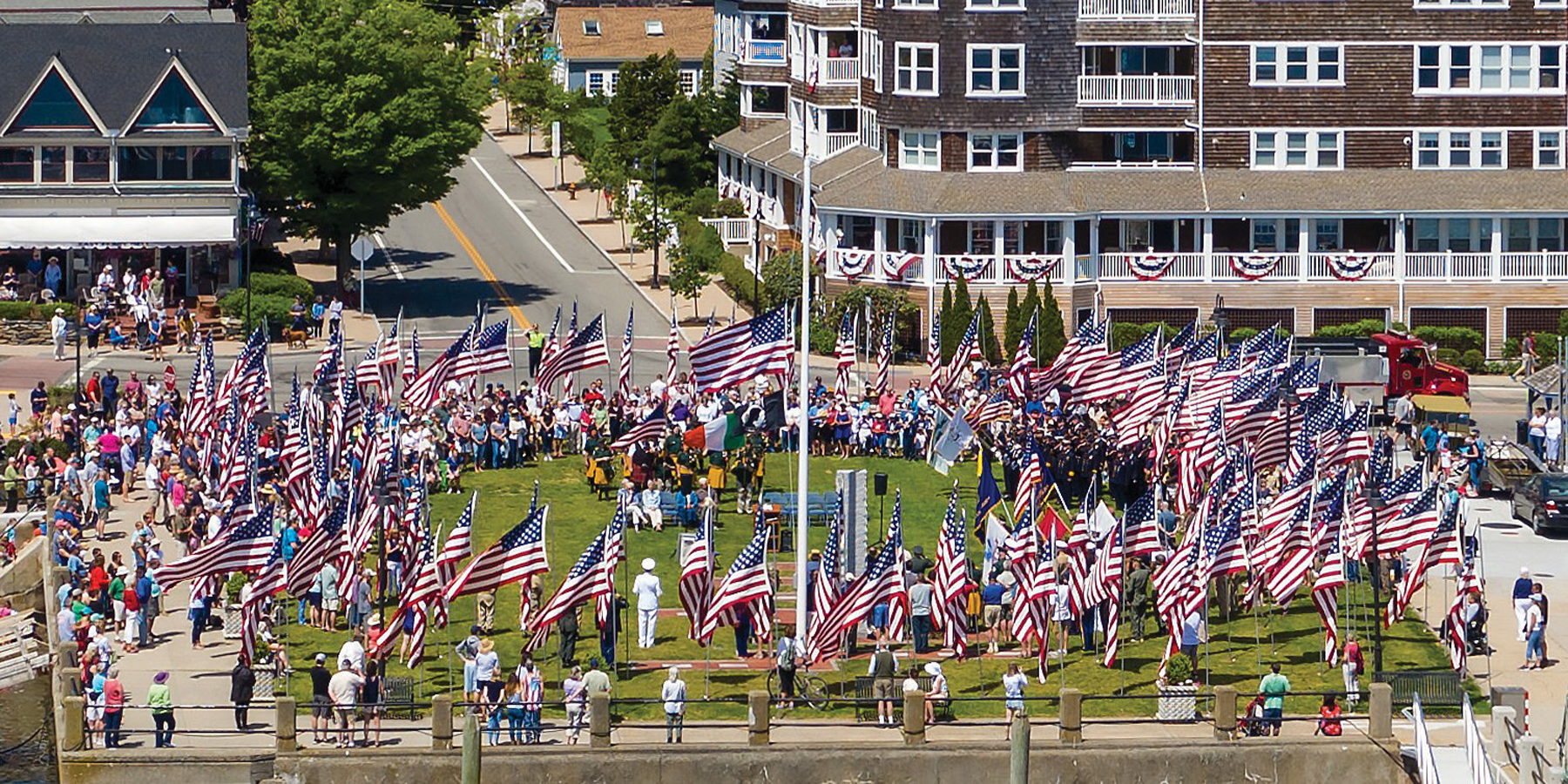 The coffin flags of Jamestown veterans fly in Veterans Square on Memorial Day in memory of all the Jamestown men and women who have served our country.

William Brooks, the patriarch of the Brooks clan, was chief engineer on the Jamestown and Newport ferries from 1896 to 1918.  He and his wife Sarah brought up their eight children in Jamestown and most of them continued to live in the town as adults.

Charles Jr. joined the Merchant Marine soon after graduating from Rogers High School.  He worked for the American Export Line for several years in the late 1920s and in the depths of the Great Depression was one of the many Jamestowners employed at the Naval Torpedo Station.  In 1937 he returned to the sea as assistant engineer on George F Woolworth’s yacht Viking for a South American and European cruise.  He was then rehired by the American Export Line.

Early in the war, the Merchant Marine was incorporated as a branch of the military forces.  Charles Jr. became a Lieutenant Commander serving in the Pacific.  In March 1945, he went ashore in the Philippines with a hunting party.  The group was ambushed, and he was shot by a Japanese sniper.  His only child, Susan, was four months old when her father died.

Bernard Anthony Brooks was the only son of Charles Sr.’s younger brother Edward, the founder of the E.B. Brooks Oil Company.  He was born and grew up in Jamestown and worked for a while for his father’s oil distribution company.  For about two years, he, like his cousin, served in the Merchant Marine as a junior engineer.

At the time of his death, Bernard was a Naval Reserve fireman, first class, on the minesweeper Eagle.  He had recently become engaged to be married.  He was home in Jamestown and his automobile struck a culvert and telephone pole on East Shore Road.   He died in November 1941, a few weeks before Pearl Harbor.

William H. Sweet was the son of the baby of the Brooks family, Cornelia, and her husband William C. Sweet.  Twelve years younger than her brothers Charles and Edward, who were only 13 months apart, Cornelia was still in her teens when their father died.

Her two sons, William and David, were born in Jamestown, but the family moved to Newport while William was still in grade school.   William enlisted in the Army Air Force four months after graduating from Rogers High School in 1942 and initially was in training to serve on C-47 military transport planes.  He asked for and received reassignment to bombers.  After training as an engineer, he was sent by way of North Africa to Italy in July 1944, where his crew joined the 513th Squadron of the 376th Bombardment Group (Heavy), flying 4-engine long-range B-24 Liberator bombers.

The crew had already flown 17 missions when, on September 10, 1944, they took off to bomb an ordnance plant in Vienna, Austria.

According to the bombardier on the mission, “The Vienna ﬂak was heavy, intense, and accurate.”  It ripped a gaping hole in the right wing and punctured a gas tank.  Other ﬂak damaged the left wing.   Flying home, with gasoline leaking from holes in the wings and a damaged fuel distribution system, they ran out of fuel halfway across the Adriatic Sea.

All ten crew members parachuted into the sea.  William, who as engineer was responsible for the proper operation of the engines, was the next to last to leave the plane and thus was one of the farthest down the ten-mile path that the plane traveled during the evacuation.

Most of the crew were picked up by an Italian fishing boat.  Only William Sweet and the ball turret gunner were not found in the rough sea.

This article is part of a series written by Rosemary Enright and
Sue Maden for The Jamestown Press. It appeared in May 2020.