Mabel Brice was born in Philadelphia in July 1877 and, like many young women of her social set,
she seems to have done little of interest for the first 35 years of her life. She, her brother Charles,
and sister Anna lived with their parents in her mother’s family home in Philadelphia. In the 1890s
and early 1900s, the family traveled to Jamestown for the summer, where they were members of the
Conanicut Yacht Club and participated in the social activities of the summer visitors. 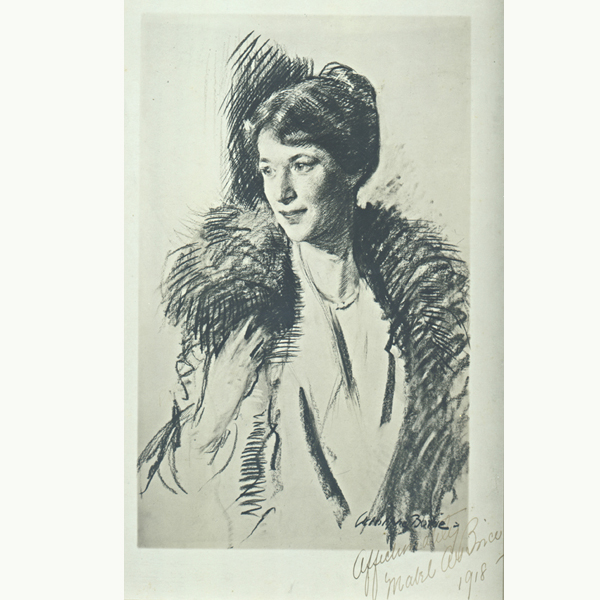 A 1918 portrait of Mabel Brice by Adlophe Borie done at the height of Mabel’s envolvement in Belgian relief.

Mabel’s younger sister and brother married in the first decade of the new century; her father, Ephraim, died in 1909.  Mabel and her mother began spending summers in Europe rather than Jamestown. They were in Aix-les-Bains, France, in late July 1914 when the events that precipitated the First World War erupted.  For over two weeks their whereabouts were unknown as they made their way across France to the relative safety of England.  Perhaps it was this experience as a refugee that excited Mabel’s sympathy for the people – especially the Belgians – who were being displaced by the war.

After the German invasion of Belgium on August 3, 1914, the country suffered a severe food shortage. The tiny nation did not grow enough food to meet its own needs, and the occupying army was taking what there was. The civilian population faced imminent starvation unless a large quantity of food was quickly brought in.

On her return home, Mabel Brice joined the Belgian Relief Committee of the Emergency Aid of Philadelphia.  The committee collected food, clothing, and money for the people of Belgium.  Donations were forwarded to the refugees in England and France, to civilians in uninvaded Belgium, and through the Commission for Relief in Belgium to the people of invaded Belgium. Hospital supplies were sent to Belgian hospitals and convalescent homes in France and England.

Between October 1914 and February 1920, the Packing Committee, which Mabel chaired, packed 1,273 cases, totaling forty-three tons in bulk and containing 889,833 articles valued at $405,193.00. All cases arrived safely at their destinations except three cases lost to a submarine torpedo attack and two cases lost when a dock at Calais was bombed.

The work of the Belgian Relief Committee did not go unnoticed. On October 27, 1919, their Majesties King Albert and Queen Elisabeth of the Belgians awarded Mabel Brice the Order of Elizabeth, a medal given to women for religious and charitable work.

With Europe unavailable, the annual treks to Jamestown were resumed.  During the war and the years following, Mabel and her mother came north in early June and stayed for the summer.

In 1920, at the age of 42, Mabel married Walter S. Wheeler, also of Philadelphia.  Newspapers described Wheeler as a “clubman and big game hunter,” whose studies on his hunting expeditions led to his election to the Royal Geographical Society of London.  The newlyweds made their home with Mabel’s mother in the house where she had grown up.

As Mrs. Wheeler, Mabel led the life typical of a Philadelphia society matron of the time.  She became Vice-President and Treasurer of the Emergency Aid of Philadelphia organization, which after the end of the war focused its attention on combatting the influenza and polio epidemics and alleviating the effects of post-war unemployment.  She served on the board of governors of the Swedish-American Society, Oncologic Hospital, and the Historical Society of Pennsylvania as well as on committees of other charitable organizations.

The visits to Jamestown continued although with less frequency and shorter duration.  Her husband died in 1936, her brother, Charles, in 1951.  In 1952, she and sister-in-law bought the house at 4 Walcott Avenue.  The house had been one of three contiguous rental units built around 1900 by the Horgan family as part of the Thorndike Hotel complex.  Until 1942, the property extended from Old Walcott all the way to the East Passage.  The new layout of Walcott as a continuation of Conanicus Avenue, changed that, and in 1946, the Horgans subdivided the property and sold the houses.

Mabel visited Jamestown occasionally until her death in 1965 at age 88.  She bequeathed her house to St. Matthew’s Episcopal Church and its contents to the Jamestown Historical Society.  The house served as a rectory for St. Matthew’s until it was sold in 1988.

This article is part of a series written by Rosemary Enright and
Sue Maden for The Jamestown Press. It appeared in April 2020.