From Automobile Showroom to Parking Lot

Harry Shatzer Sr. had one foot in the 19th century and one in the 20th.  He owned a livery stable as well as being one of Jamestown’s first automobile mechanics.  His letterhead had a horse as a logo; his statement of purpose under the logo said “Expressing and Teaming of Every Description; Automobile Supplies and Repairs; A Specialty Made of Storage, Packing, and Shipping.” 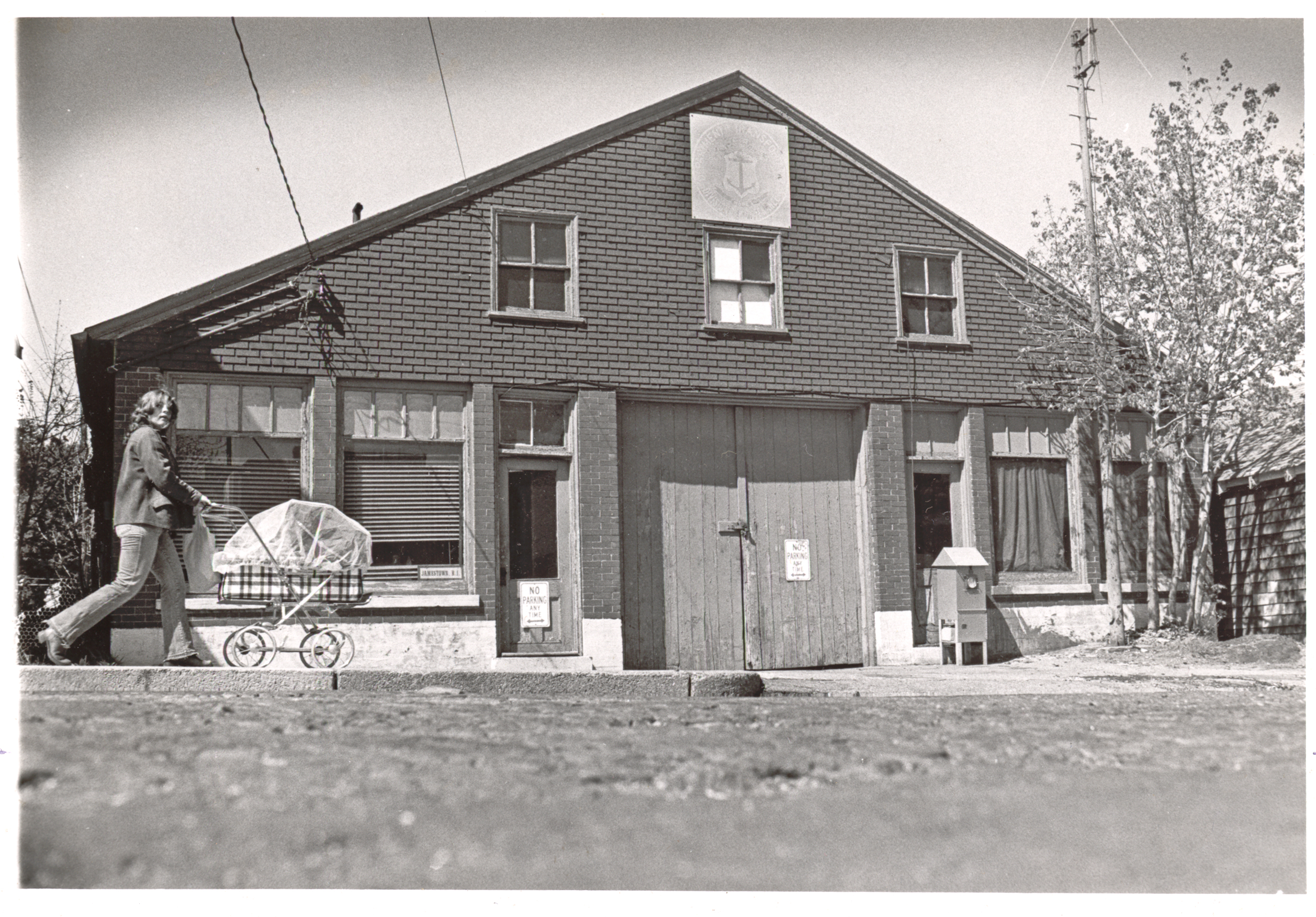 A mother pushes her baby carriage past the deserted garage at 26 Narragansett Ave. during the 1970s. The property was owned by the state Department of Transportation at that time.

Shatzer’s garage and livery stable were at 20 Narragansett Avenue, where Conanicut Marine is now.  In 1915, Shatzer built a 4,200-square-foot showroom for new automobiles just two doors west at what is now a town parking lot at 26 Narragansett Avenue.  Five years later, he joined T. Remington Wright to form the Jamestown-Newport Transfer Co.  The transfer company, an extension of Shatzer’s packing and shipping activities, collected freight coming in on the ferryboats and delivered it to its destination in Jamestown, as well as storing and packaging materials going to and from the ferry.  Shatzer operated the company from his automobile showroom.

Shatzer died in 1922, and the transfer company went into receivership in 1925.  What the building was used for during the 15 years after Shatzer’s death is not recorded.  Perhaps, like the garage at 20 Narragansett, it was used to store summer cars – cars that summer residents used on the island but did not want to drive back to their winter homes.

The Hurricane of 1938 brought the building a new purpose.  The hurricane destroyed many of the shoreside facilities used to maintain the Jamestown & Newport Ferry Company fleet.  The company – at the time a commercial enterprise owned solely by the Town of Jamestown – bought the 25-year-old building and turned it into a machine shop.

Even before the devastation of the 1938 hurricane, the ferry company had been in financial trouble.  The ferry had not made a profit since 1932.  The two ferryboats remaining after the storm were expensive to run and too small to accept modern trucks and buses.  After limping through the 1940s and accumulating $250,000 in debt, the town voted at a special financial town meeting in 1951 to lease the system to the state for $1, even though the state refused to take on the debt.  In 1956, the state purchased the entire ferry system for $270,000 – essentially the amount of the debt.

The sale included the transfer of the maintenance building at 26 Narragansett Avenue to the RI DOT. The Jamestown & Newport Ferry Authority continued to use the building for ferryboat maintenance.

When ferry service was discontinued with the opening of the Newport Pell Bridge in 1969, the building was boarded up and locked.  Very little was done to maintain it.  So little, that in 1977, the Arnold Zweir American Legion Post #22 donated the paint, window glass, and materials necessary to spruce up the façade.  DOT provided the labor only.

For almost 20 years, Shatzer’s old automobile showroom stood empty and deteriorating, an eyesore in middle of Jamestown’s revitalized commercial district, while the town and state haggled over the property.  At one point, the state offered the property to the town for $58,000 – more that 20 percent of what the state had paid the town for the whole ferry system.  The town refused.

Finally, in 1986, the town’s representatives in the General Assembly – Rep. Norma B. Willis and Sen. David R. Carlin Jr. – convinced the state to give the property to the town.  The transfer stipulated that the town could not sell the property and that it had to be used for public purposes.

The Town Council was delighted with the decision.  Everyone agreed that the building itself was of “zero value,” but that the acquisition of the property was a “real prize.”  The discussion now centered on what to do about the building.

From the beginning, the bias was toward demolition and the creation of a parking lot. The demolition decision was not unanimous, however, and while Town Councils debated, the building was rented to H.V. Holland Inc. and Jamestown Distributors for storage.

In January 1992, despite some last-minute maneuvering by anti-demolition forces, the town awarded at $13,000 contract for the demolition of the building, and the old automobile salesroom / machine shop was razed.  The lot was paved, and curbing installed.  Seventeen new parking spaces were added to the downtown area.

This article is part of a series written by Rosemary Enright and
Sue Maden for The Jamestown Press. It appeared in February 2020.