Joseph Clarke (1618-1694), one of the original purchasers of Conanicut Island, was the ancestor of many of the Clarkes who greatly influenced Jamestown in later centuries. Perhaps the most remarkable group were the six Clarke women born between 1853 and 1880. They were the daughters of two brothers – David Otis Clarke (1827-1917) and Thomas Hartwell Clarke (1834-1919). 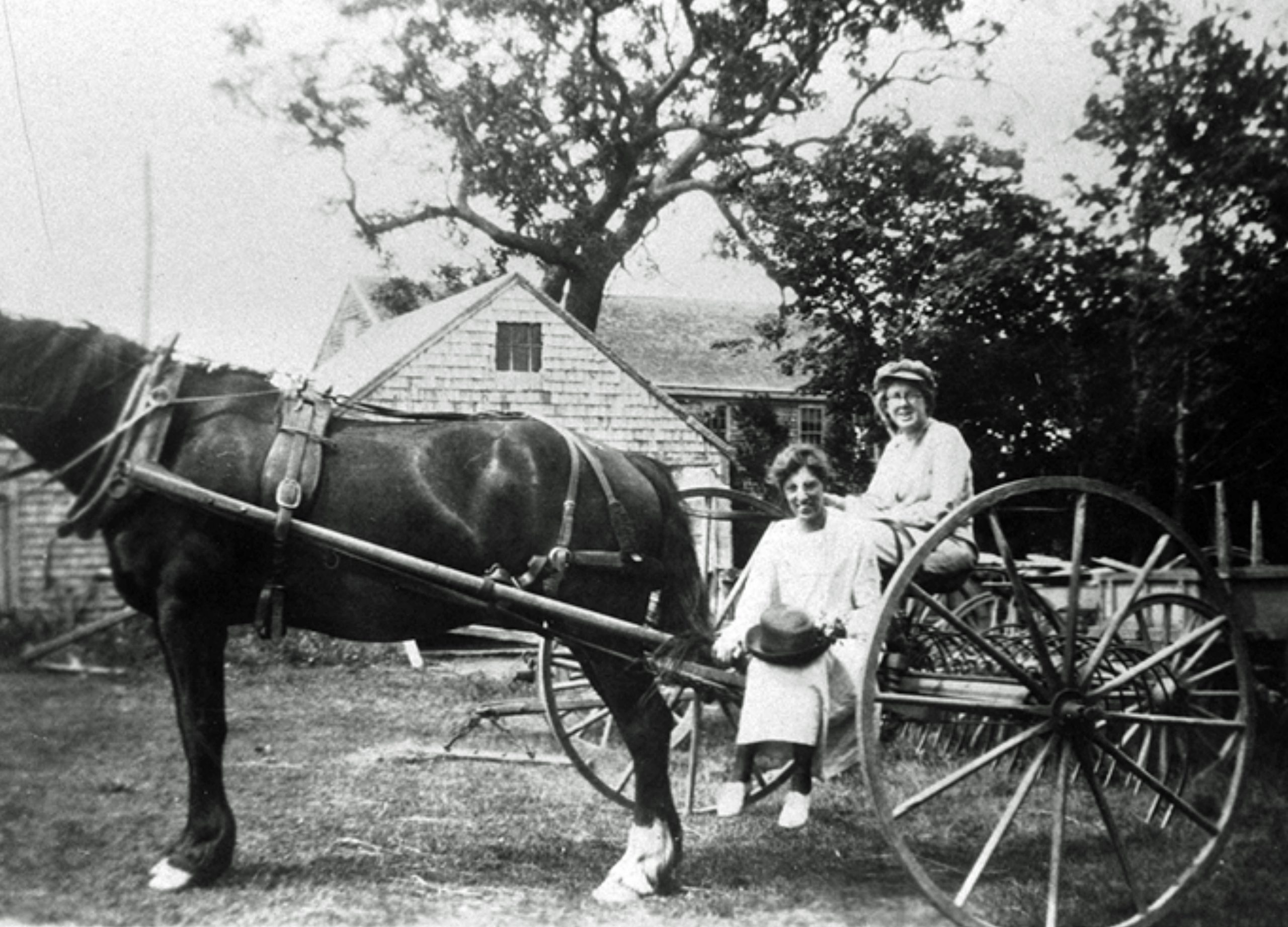 Jennie and Clara Clarke, from left, on a hayride at their sister Mary’s farm, circa 1910. The women are descendants of Joseph Clarke (1618-94), one of the original purchasers of Conanicut Island.

The brothers were born in Jamestown.  As young men, they left.  David became a planter in South Carolina, where the family lived during the Civil War, and then Florida.  He and his family visited Jamestown often.  Thomas Hartwell became a teacher and later superintendent of schools in Newport.  He brought the family back to Jamestown in 1882 where he served as superintendent of schools.

All six Clarke female cousins were interested in Jamestown’s history and five of six spent most of their lives on the island.

Flora Clarke Weeden (1853-1939), David’s child and the eldest of the cousins by almost 15 years, married Charles E. Weeden and together they managed Prospect House, a small inn on Green Lane, and later the 110-room Hotel Thorndike on Conanicus Avenue where BankNewport is now.  When the Jamestown Historical Society was founded, she was elected Vice President and later served as treasurer.  She was for many years a member of the governing body of the Jamestown Philomenian Library.

Elizabeth Clarke Helmick (1866-1951), Flora’s younger sister, was the only one of the cousins to travel much beyond the shores of Conanicut Island.  She married Lieutenant, later Major General, Eli A. Helmick, and when possible followed him to his posts.  Between times, Jamestown was home, and in 1931 she and her cousin Lena Clarke wrote the first full history of Jamestown, which was published in a series of 16 articles in the Newport Daily News.

During her husband’s assignment as a Military Science faculty member at Hillsdale College in Michigan, she enrolled at the college, was inducted in the Pi Beta Phi women’s fraternity, and became the historian for the fraternity.  She was chair of the Pi Beta Phi committee that established a settlement school (now Arrowmont School of Arts and Crafts) in Gatlinburg, TN, in 1912, and was later national adjutant general of the Daughters of the American Revolution.

Lena Clarke (1867-1955) followed in her father Thomas Hartwell’s footsteps and became a teacher.  After training at Harvard summer school, she began her teaching career in the tiny one-room schoolhouse that is now the Jamestown Museum.  When she retired 45 years later, she was principal of the Thomas H. Clarke School on North Road, which had been named for her father.

Lena was a charter member and the first President of the Jamestown Historical Society.  Lena was also the first contributor to the JHS photography collection.  In 1920, she and her friend Maud Stevens toured the island, taking snapshots of old houses and buildings such as the town animal pound.  Lena donated the photographs to the society and followed up with a monograph “Some Old Houses in Jamestown” and a more detailed description of Thomas Paine’s “Cajacet.”

Mary Clarke Hammond (1871-1948) taught kindergarten before her marriage to John Hammond, a prosperous Jamestown farmer and Jamestown Town Clerk.  For 15 years, she was the librarian at the Jamestown Philomenian Library, which after 1898 was housed in the schoolhouse where her sister Lena had begun her teaching career.  She was also the historical society librarian and curator and contributed to Lena and Elizabeth’s 1931 history of the town.

Sarah Jane Clarke (1880-1972), the youngest of the cousins, was known as Jennie. She was a Jamestown telephone operator and manager of the telephone office on the island for 38 years.  These were the days when to make a telephone call, a person picked up the receiver and spoke directly to the operator, asking to be connected to desired number.  The operators knew almost everything that went on in the town and were often the source of news about town events.

From 1916 to 1950, Jennie kept scrapbooks of news items about Jamestown.  The collection of 10 scrapbooks, now in the historical society collection, provide insight into day-to-day life in Jamestown.

This article is part of a series written by Rosemary Enright and
Sue Maden for The Jamestown Press. It appeared in March 2020.