In early Jamestown through the first half of the 20th century, the area that is now Beavertail State Park was a popular fishing ground. As early as 1754, the Newport Colonial Lighthouse Committee had guaranteed a Right of Way to the water around the lighthouse. 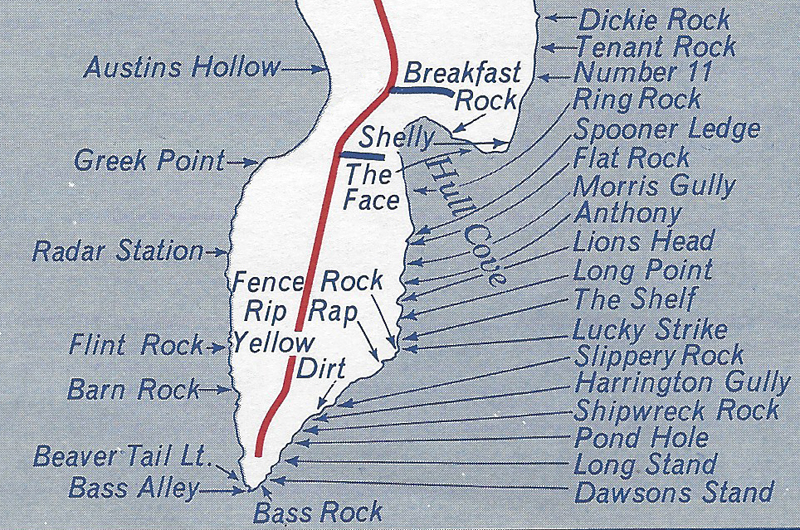 Favorite fishing spots around the Beavertail peninsula were given names.  A striped bass caught from Ring Rock by Jamestown’s Arthur Clarke in 1936 held the record for largest bass caught from surf until 1963

Local fishermen owned small plots of land nearby with shacks for comfort and storage.  Serious sports fishmen built one-man fishing piers out from the rocks to reach the deep waters where the sea bass ran.  A few wealthy visitors, such as Eliza Alexander and Robert Golet, built summer homes.

That all ended in August 1942, when the U.S. Army took the land for Fort Burnside, one of the major military outposts for the defense of Narragansett Bay in World War II.  Through most of the war, the Beavertail Road was blocked just south of the Beavertail farmhouse and a man in uniform checked the credentials of anyone going beyond.

The war ended in August 1945, but the military presence at Beavertail did not.   The U.S. Navy, which had cooperated with the army in the harbor entrance control activities at the fort and commanded a radar development facility in the northern part, immediately converted the facility to a communications center.

At first, the naval presence did not interfere with civilian access to the point.  Then, in the summer of 1951, the road was once again closed “for security reasons.”

Although the nature of the installations to be guarded was not revealed, the Jamestown Town Council was repeatedly assured that the closure was necessary.  “Much work of [a secure] nature,” said Admiral William M. Fechteler, President Truman’s Chief of Naval Operations (CNO), “will have to be done in the area if it is to be developed as a key naval defense link.”

Jamestown residents and the Town Council protested vigorously.  Beavertail Point was important to Jamestowners for many reasons.  The curtailing of visits to one of the town’s most beautiful scenic spots was, of course, the source of some of the complaints.  Of equal importance was the economic impact.  The Town of Jamestown had built the Jamestown Bridge, which was only partially funded by a federal grant.  Funds to pay off the construction bonds and to maintain the bridge came from tolls.  Fishmen crossing the bridge to get to Beavertail were an important source of toll money.

At first, the navy was adamant.  In addition to the existing radar station, 25 radio antennas were being erected.  Each was connected to one or more of 30 transmitters.  The tallest was the 654-foot lower frequency antenna, used to communicate with submarines.  Messages could be sent around the world.  One unique mission assigned to the station was to relay the classified “Emergency Action Message,” which could commit the nation to the use of nuclear weapons.

Two years later, in the summer of 1953, under the new Eisenhower-appointed CNO Admiral Robert B. Carney, the Navy relented a little.  For two months, vehicles were allowed to go to the southern part of the reserve as long as the town provided a guard during visiting hours to keep visitors within the designated the area.  The Navy also patrolled the area.

Not satisfied, the Town Council continued to press for keeping Beavertail open year-round.  They were not successful and in 1954 and 1955, public recreation – for the most part fishing and picnicking – was allowed from late June through Labor Day, from noon till 6 p.m.   Both the town and the navy continued to furnish guards.

The reopening came in 1956.  The Navy moved the radar station to Quonset and opened Beavertail to the public on a full 24-hour basis with the caveat that closures would occur occasionally when operational exercises were scheduled.  In return, the town agreed to “provide necessary civilian security measures to ensure that the privilege is not abused.”  These measures included a guard to patrol the area and a program to keep the area clean. 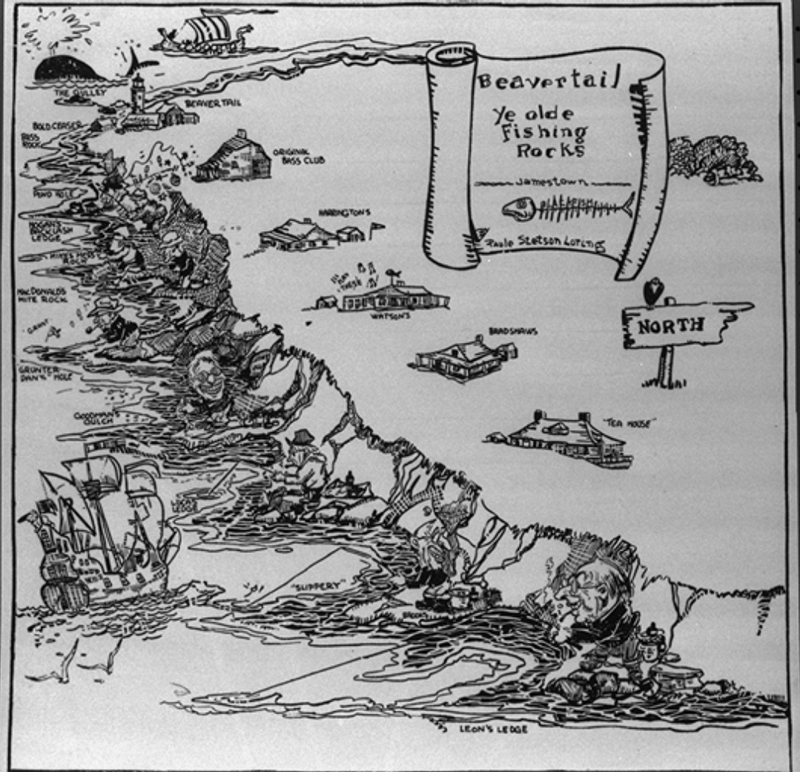 This map, first published in Saltwater Sportsman Magazine, was reissued by The Jamestown Bridge Commission to encourage fishmen to pay the bridge toll to come to Jamestown.

The following year, the Jamestown Bridge Commission took over the cost of the guard.  As expected, the bridge was profiting from the reopening.  Traffic over the bridge increased 6.3 percent during September, compared to the same period the previous year.  The guard at Beavertail area counted 1,340 out-of-town cars and 1,931 local vehicles frequenting Jamestown’s favorite fishing spot during the same month.

This article is part of a series written by Rosemary Enright and
Sue Maden for The Jamestown Press. It appeared in August 2020.