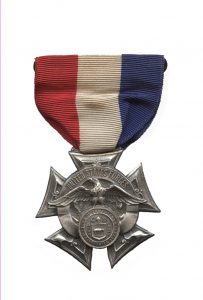 In honor of Veterans’ Day, November 11, medals and certificates awarded to Jamestowners during World War I and World War II are on display in the JHS exhibit case in the foyer of the Jamestown Philomenian Library.  The awards have been given to the historical society by the families of the recipients.

Among the service medals on display are the Navy Cross received by Commodore Cary Magruder, then a Lieutenant, for distinguished service “in offensive and defensive action, vigorously and unremittingly prosecuted against all forms of enemy naval activity during World War I”  and the Purple Heart awarded to PFC Howard Arnold, the first Jamestowner killed in action in World War II.  Medals were awarded by the town of Jamestown to World War II veterans, including CPO George H. Cadorette and Rear Admiral Ralph C. Alexander.

Pictured above: Medals and Buttrick receiving the Air Medal.