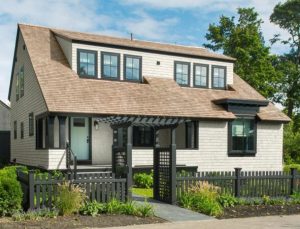 Don Powers, owner and designer of the recently renovated Zero Energy House on PBS’s This Old House was the guest speaker at the Jamestown Historical Society annual meeting on Tuesday, August 20 which was held at the Jamestown Library.

His talk, titled New History: How A State Of The Art Net-Zero Home Can Celebrate Our Traditions And Help Secure Our Future, was attended by a sold out crowd that asked many questions about sustainable architecture and how it can benefit the community we live in, now and in the future.

Donald Powers received his B.S. in Architecture from University of Virginia, where he was awarded the annual Design Prize, and his Master of Architecture from Harvard University’s Graduate School of Design. He is an active member of the Congress for the New Urbanism, a founding board member of its New England Chapter, and is a board member of GrowSmart Rhode Island. He holds professional licenses in Rhode Island, Connecticut, Massachusetts, Michigan, and Virginia.

The society’s business meeting and election of officers began at 7 pm and Mr. Power’s presentation followed at 7:30.